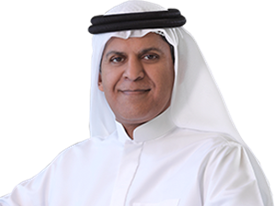 Salman Dawood Abdulla has been in charge of Health, Safety, Sustainability, Environment, Fire & Rescue, Quality and Business Transformation at EGA since 2016.

He has a wealth of experience designing, building, operating and maintaining large industrial plants. Mr. Abdulla joined DUBAL in 1984 as an engineering apprentice. He has held senior positions including General Manager of Power and Desalination at DUBAL, Chief Operations Officer and Vice President of Operations, and Senior Vice President of Al Taweelah Operations.

During his tenure, Mr. Abdulla also led the design, startup and stabilization of both Phase 1 and Phase 2 of the EMAL project and was responsible for the design, tender and installation of a 1GW+ power plant over a period of 10 years.

His professional memberships include Chartered Engineer and Member of the Institution of Engineering and Technology (UK) since 1998. Mr. Abdulla was appointed as Chairman of the Safety and Environment Committee of the Gulf Aluminum Council in 2017.