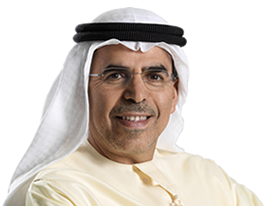 Abdulla Jassem Kalban is Managing Director of Emirates Global Aluminium. Mr. Kalban is the most senior Executive at EGA and a member of the Board, and is responsible for EGA’s achievement of its strategic objectives and for key strategic projects.

Mr. Kalban served as Managing Director and Chief Executive Officer of EGA from the company’s formation in 2014 until 2019.