The power of ideas

Of the over half-a-million suggestions since the introduction of Emirates Global Aluminium’s Suggestion Scheme in 1981, there is one that Kalachoor Narayanan Nair Raghunathan will always remember.

It was a suggestion that, since its implementation in 2006, EGA’s General Superintendent, Innovation believes has saved the company “at least” AED70 million. The simple, yet hugely effective, suggestion involved improving power generation and water production for the steam turbine by diverting outfall water.

“Desalination Operations used to take water from the break water and also discharge sea water to the same area, which would result in the recirculation of water,” Raghu – as he is known to colleagues – said. “But by taking the water outfall towards the north side, away from the breakwater, the temperature of the incoming water reduced. That meant savings in power generation and water production of almost AED6.6 million annually.

Raghu added: “It sounds such an obvious thing to do, but sometimes it takes someone to look at things differently.”

Having moved on 29 June 1992 from Mumbai to join EGA, Raghu is soon set to pass an incredible 30 years milestone of important and dedicated service.

Raghu initially began working in the safety department as an administrator, but has been managing the Suggestion Scheme since 1995. Back then, he remembers, “we used to receive around 3,000 to 5,000 suggestions in a year”.

But nowadays? “Anywhere between 20,000 to 25,000 suggestions – although the highest yearly figure recorded was 38,000 in 2018,” said Raghu, whose knowledge of the scheme is encyclopaedic.

A vital part of handling that volume of suggestions is the online system, for which Raghu played a crucial role in both the design and introduction. And while almost everything is done digitally in the modern world, things were very different more than 20 years ago. It left the young Raghu pondering how to get employees – the majority of whom were on the shop floor – to move from a paper-based system to an online one.

“To overcome the initial hiccups, we introduced an extra incentive system for the entry of suggestions, which was extremely successful.  Once the employees settled with the new system, we didn’t need it anymore as the entry of suggestions climbed higher, proving in itself the popularity of the scheme. In 1999, most of our suggestors were not familiar with computers and we were able to educate them on how to use the system and it’s about knowledge.” 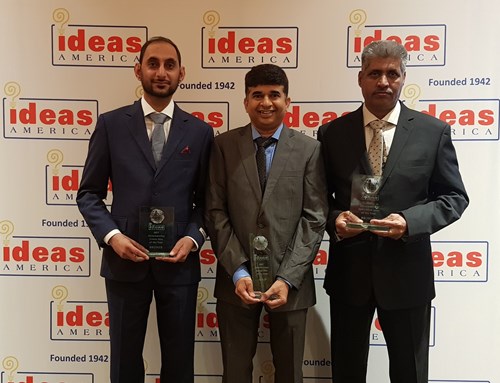 With his decades of experience, Raghu knows that “the beauty” of the Suggestion Scheme  is that it involves employees educating and helping the company. It is, he says, a system that greatly fosters interaction and engagement.

“The Suggestion Scheme encourages employees to contribute constructive ideas for improving the organisation in which they work,” Raghu, who has a Bachelor’s degree in Commerce from Kerala University in India, said. “It's a win-win situation for both employees and the organisation. The person who works eight hours a day on the shop floor knows in great detail what is happening in their area of the plant – and knows what is happening to their equipment. If I sit in an office, I might have an overview of what is happening, but I may not know the exact details.

“So, we request employees to suggest wherever they see improvements are possible – and then let’s improve it, get it implemented, and you get recognised for your improvement. At EGA, we are recognising our employees.”

There are various recognition programs for employees who make suggestions– such as the Area Get Together sessions where area managers are present, and the Appreciation Awards ceremony where the CEO praises the contribution of employees. There is also the annual judging of best suggestions in various categories. And last but certainly not least, there is the Rashid Awards ceremony – where the CEO and ExCo members recognise the very best from across the organisation. This year, they decided to surprise the winners in front of their peers with a personal visit to their workplaces, rather than holding a staged event.

Every suggestion also recognised with a small financial reward, which can grow much larger if it is successfully implemented and delivers significant cost savings.

Raghu’s favourite recognition memory, however, comes from nearly 25 years ago – and it is a memory that EGA has really built upon since then. 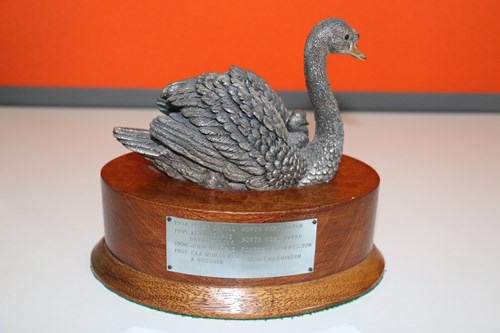 “In 1997, management agreed to sponsor employees to participate in the Ideas UK competition held in the United Kingdom,” he recalls. “EGA won its first international award for a suggestion in the Environmental Category, and it was a proud moment for all of us. I still recollect the happiness on the faces of the suggesters who went to the UK. Since then, EGA has sponsored almost 150 employees to participate in local and international competitions in the UK, USA and Germany – and has received more than 100 awards in these competitions.”

Another favourite moment of Raghu’s occurred almost five years ago. Al Taweelah maintenance employees suggested that rather than EGA buying a new basement cleaning machine for around AED1 million, they had a plan with a solution far closer to home. 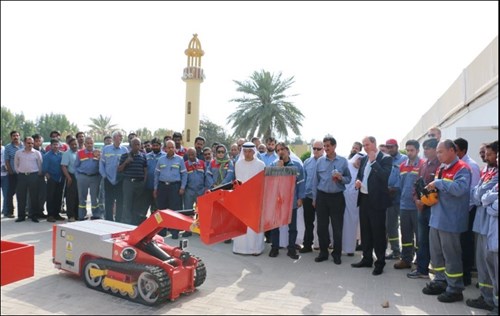 “The implementation of a remote-controlled robotic cleaning machine with advanced features was completely made in-house,” said Raghu. “They didn't spend much on it and the resultant savings from that particular suggestion were almost AED900, 000. This is something which was well appreciated by the CEO.”

And well appreciated not just for the financial savings, adds Raghu, but for recycling a lot of the materials for the new machine, making its production even more sustainable.

“It really was something beautiful,” he added.

All suggestions are welcome at EGA, even if they are not as hugely impactful as the water outfall one from 2006 or the robotic machine brainwave from 2016.

Raghu says that over the past five years around AED145 million has been saved by the company thanks to employee suggestions.

“Many small improvements add up to a big change,” said Raghu. “But also by encouraging everyone to submit their ideas, even if only a small proportion of them are truly game-changing, that will be a lot.

“Last year 19,000 suggestions were rewarded, and 237 of those suggestions alone delivered savings of around AED40 million. You need everyone to be thinking and proposing their ideas. That means you have a gold mine.”

So much a gold mine, that Raghu, a Certified Administrator of Suggestion Systems (CASS), has had many requests from other organisations to benchmark their approaches to continuous improvement against EGA’s Suggestion Scheme.

“Many organisations have come to us for benchmarking over the years,” said Raghu. “Everyone from Ministries and public service providers to major companies. They see the success and this is a learning opportunity for us as well.”

One crucial part of the success of EGA’s Suggestion Scheme – where approved suggestions are ideally implemented within 90 days, and ideas are never outright rejected but instead deemed not currently feasible – is the decentralised system, says Raghu.

“As an employee, if I want to find out the status of your suggestion, then everything is known to the employee, and everybody can see the suggestion. Since 1999, almost 500,000 suggestions have been entered in the system and anyone can view all of them going all the way back. Now, we also provide employees with a mobile application to submit their ideas.”

In a bid to make things even faster, however, EGA plans to have Suggestion Scheme 2.0 running “hopefully by 2022”, reveals Raghu. After all, no matter how well things are doing at a company, “there’s always room for improvement”, he suggests.

As Raghu concludes his recollections of the Suggestion Scheme, he confesses it “amazes” him that an employee participation program introduced in 1981 to tap the full potential of the workforce to contribute to continuous improvement has now completed 40 years.

“I am sure this has only been possible because of the top management involvement and the wholehearted support of our employees at all levels of the organisation,” he continues.

“The success of EGA’s Suggestion Scheme is due to several critical factors – mostly, however, it is because of the EGA management who really believe in their people and value their knowledge.”

“Many organisations say ‘People are our greatest asset’, but the big difference at EGA is we actually believe in it and act.”