A lifetime of commitment

As a young Santosh Rai gazed around the huge facilities in Jebel Ali back in 1990, an apt description came to mind of the company he had recently joined: “the giant that never sleeps.”

Today Emirates Global Aluminium, has grown much bigger and produces one-in-every-25 tonnes of aluminium made worldwide. The phrase resonates more than ever for Santosh.

For 32 years, he has given tireless service to EGA – working his way up from various utility operator roles to the training centre, and then to his current position as Senior Officer, Learning Development and Delivery. But it was 2021, during which he was formally-recognised for his heroism in helping tackle COVID-19, that Santosh appreciates most. In unprecedented circumstances, Santosh showed remarkable devotion, courage, and teamwork, volunteering to help his colleagues.

“Although it was incredibly hard for all of us, 2021 was my best year in 32 years because I got to give something back to a company and people who have given me so much satisfaction and enjoyment,” said the Indian national. “I love working for EGA.

“I'm not a hero but I was more than happy to help work with all the safety measures and help people. At EGA we put safety first and always, and I am committed to eliminating the risk of harm from our operations and processes.”

Decked in a hazmat suit just like the ones you see on TV – “it’s actually very light, and very easy to wear” – Santosh helped colleagues meet COVID-19 protocols such as social distancing and the correct wearing of enhanced personal protective equipment. He also ensured that when someone did test positive for COVID-19 on a shift, that the individual was cared for and rapidly isolated. “Working in heavy industry is a manual endeavor, so we could not just all work from home,” Santosh said. “We had to work incredibly hard to keep everyone safe, and engage all our colleagues in this responsibility to themselves and each other.”

“We had to ensure the giant that never sleeps keeps going – we cannot let it idle!” adds Santosh with a smile.

Ask why he has stayed at EGA more than three decades and Santosh, who joined Dubai Aluminium in 1990 after moving from his hometown of Mangalore in Karnataka, replies that the purpose of the company resonates with him immensely.

“Our EGA purpose is together, innovating aluminium to make modern life possible. The fact that we contribute to modern life across the globe resonates with every employee.”

The other reason, Santosh adds, is the support the company has provided in developing his career. “In return for the training and guidance, I'm giving everything I can,” he says. “It’s been a fantastic journey.”

Santosh’s normal job responsibilities at the company include training EGA employees and contractors in the various areas of the Carbon plant, on machinery operations and safety. He enjoys the challenge of his role as trainer, focused on enabling safe and quality work, as well as the development and growth of individuals, “who reflect the success of the organisation.”

But perhaps the area in which he has become such a well-known face at EGA is through the guided tours and plant tours he conducts for visitors, students and new employees. “That is such an enjoyable experience as you meet so many different kinds of people and nationalities,” he says. “They come from different parts of the world because we sell aluminium to so many countries, and we have people working here from many countries too!”

Santosh is not just a motivated, adaptable, flexible employee, but a much-appreciated colleague and friend to many at EGA. The Dubai-based law graduate describes counselling as one of his strengths because he feels it really helps the development of individuals. “EGA’s bold aspiration of achieving zero harm to people includes a focus on fostering mental wellbeing. The COVID-19 pandemic has been difficult for us all, and EGA has offered many virtual seminars and well-being sessions to help its employees cope throughout this difficult period.” 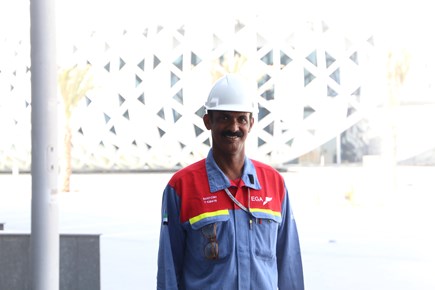 It is a working life, however, that comes amid a backdrop of personal tragedy. On May 22 2010, Santosh lost his wife, Reshma, and two children, son Naland, and daughter Viha in a plane crash. They were among the 158 people killed in an Air India Express flight from Dubai that crashed on landing at Mangalore.

Despite this horrendous experience, Santosh has embraced life since with a huge spirit.

“I love talking about them, because I have got a lot of memories of them,” he smiles. “When I talk about them, I sustain those memories.

“My wife was my classmate. Both children were born in Dubai. It was a wonderful family we had. I hope they are proud of me, and I love and cherish all my memories with them.”

Santosh may think of EGA as the giant that never sleeps, but he too is a giant of a man – with a strength that is an inspiration to his colleagues at EGA and everyone he meets.