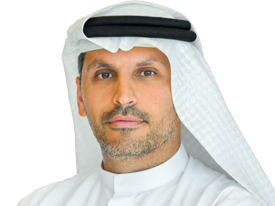 His Excellency Khaldoon Khalifa Al Mubarak has served as the Chairman of EGA since its formation in 2014.

After beginning his career at the Abu Dhabi National Oil Company, H.E. Mr. Al Mubarak held a number of positions at UAE Offsets Group before assuming his current responsibilities.

He is also Group Chief Executive Officer and Managing Director of Mubadala Investment Company PJSC. In addition, H.E. Mr. Al Mubarak acts as Chairman of the Emirates Nuclear Energy Corporation, and Vice Chairman of the Abu Dhabi Urban Planning Council and as a board member of First Abu Dhabi Bank PJSC and sits on the Board of Trustees of New York University. He is also a Global eHealth Foundation Ambassador.

In 2007, H.E. Mr. Al Mubarak was made a Commander of the Star of the Order of Italian Solidarity for his contribution to the international reputation of Italy and its economic relationship with the UAE. He also acts as co-chair of the Abu Dhabi-Singapore Joint Forum, established to strengthen economic and political ties between the Emirate of Abu Dhabi and the Republic of Singapore.