Continuous improvement, says Goutam Talukdar, a Senior Technician at Emirates Global Aluminium’s Jebel Ali plant, is just as important as innovation in the success and growth of the biggest industrial company in the United Arab Emirates outside oil and gas.

Goutam should know. Along with his team, he has just won an EGA Rashid Award – one of three this year for the very best continuous improvement initiatives at the company. Goutam’s team won for finding a way to fix a niggling operational issue that had eluded solutions for years and was costing the company $300,000 annually to work around.

Goutam said: “Winning a Rashid Award was truly a glorious moment for me and the whole team. We feel great delight to have been chosen for this honour.”

“Innovation is turning a creative idea, or the concept of one, into a reality that does not yet exist. Continuous improvement deals with things that already exist and consistently strives to make them better. Both are priorities for us at EGA because both create value,” added Goutam. 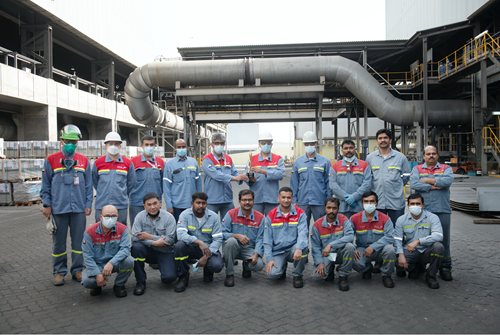 Continuous improvement at EGA is driven by the experience over decades that a steady stream of improvements – however small – add up to transformational results. Everyone at EGA is involved, and well over half a million ideas have been proposed by employees at all levels of the company since EGA’s Suggestion Scheme was launched in 1981. The company also has another programme, called Tamayaz, which sees mid-level managers bring together teams to understand bigger improvement opportunities.

The Rashid Awards recognise the most impactful ideas submitted through EGA’s Suggestion Scheme and the most effective Tamayaz projects.

The people closest to a work process are often in the best position both to spot opportunities to improve and think of ways to make that improvement.

That was the case with one of the other winning teams. Ritesh Vitthalji Varu, a Senior Technician - Electrical, came up with the brainwave that ultimately scooped the ESG award.

Venkatraman Krishnamoorthy Somasundaram, his senior supervisor, said: “Ritesh was the one who attended to the break down and this prompted him to investigate further and zero in on the solution with the broader team. It is great that Ritesh’s idea, and the teamwork that made it happen, has been recognised in front of the whole company.”

Al Taweelah-based Somasundaram added: “When it was announced that we had won we were really excited. It just goes to show that everyone at EGA can contribute to our success.”

The project was part of the Tamayaz programme, unlike the other two this year which originated from the Suggestion Scheme.  Mohammed and his team’s idea was a more effective way to assess the reusability of spares and resulted in annual cost savings of around $2 million.

Mohammed said: “By reusing in a smart way, we discovered that we achieved a longer useful life for these components. The Rashid Awards are very close to our hearts at EGA. To win is something every employee looks to achieve. There are only three awards each year, so it is not easy. Only the most effective and collaborative teams will reach this level.”

Fellow Rashid Award winner Goutam agreed, adding: “If you work together, you can solve any problem  and continuously improve.”