Water, water, are you there?

On an average day, Mohamed Al Bishr drinks around four litres, or about 25 standard glasses, of water.

As Acting Manager of Industrial Health & Hygiene at Emirates Global Aluminium, and manager of the company’s Beat the Heat programme, staying hydrated is, in many ways, part of the job. “I like to lead by example,” says Mohamed.

“Water is essential to the health of every human being, but it is especially critical for those of us who work outside in hot, humid conditions—and that’s a message that cannot be repeated enough, especially in these hotter summer months.”

Indeed, water keeps our organs functioning well, lubricates and cushions our joints, and regulates our body temperature and metabolism. It also helps transport nutrients from our food to where they are needed, and literally flushes out toxins and waste.

Heat-related illness is a serious hazard in the Gulf summer. But it is entirely preventable, and easily treatable if detected early.

“The incredible health benefits of drinking sufficient water and staying hydrated are unquestionable,” Mohamed continues, “and that’s an important message to relay to EGA colleagues.”

Having graduated from university with a degree in Environmental Health Sciences before becoming a public health officer for the Dubai Municipality, Mohamed appreciates better than most just how big a role water plays in our daily lives and overall health.

As a Dubai Municipality Public Health Officer, Mohamed was—among other things—responsible for educating staff at local industrial companies, including EGA, on issues related to workplace health and safety. At these companies, he was also responsible for ensuring compliance with the government’s safety and public-health regulations.

After five years working for Dubai Municipality, Mohamed joined EGA as a health and hygiene specialist in the company’s Health and Safety department, where he immediately put his public-health knowledge and experience to work.

Just as immediately, he also learned to appreciate “the difference between educating, inspecting and evaluating a company’s health-and-safety processes from the outside, as a government public-health official; versus working day in and day out at the same company, where I am responsible for actually coming up with the processes, and implementing the health and safety programmes.”

Pausing to reflect, Mohamed, adds: “The responsibility is tremendous. At EGA, I am accountable not only to the municipality and its regulations, but also to the company and thousands of employees.”

To say that working at EGA has been a transformational experience would be an understatement for Mohamed, a 36-year-old Person of Determination who credits EGA with opening up new opportunities for him to pave an exciting and fulfilling career path.

The months before joining EGA were “a difficult time for me,” Mohamed remembers. “I was emotionally broken and filled with uncertainty about my abilities. But then,” he continues, perking up, “the EGA opportunity arose and, thankfully, I found the courage to accept the job. And now today, I can say with confidence that I can do anything I put my mind to.”

Mohamed started out in 2010 at EGA’s then-newly operational Al Taweelah site, where the Beat the Heat programme first launched around the same time. Of those early days, he recalls, most Al Taweelah employees were new, arriving either from Europe, South Asia or the Philippines. And when it came to learning about or engaging with Beat the Heat, most of them either did not understand or were not interested. 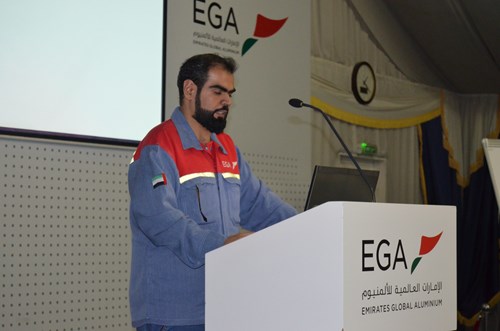 In the 11 years since, however, the programme has adapted new tools and techniques to better communicate, engage and educate employees on the importance of consistent hydration, as well as staying alert to and immediately reporting signs of heat-related illness, Mohamed says:

We’ve adapted our communications about Beat the Heat to go well beyond in-person workshops and trainings. Now, through Axonify, we also engage employees in online games and courses, which are very effective in helping staff absorb the important messages that will keep them safe. We also make sure we are communicating to staff when and where most relevant. For example, we’ve hung educational posters in restrooms to educate EGA employees about how urine colour is one of the most convenient and effective ways to measure one’s hydration level.

The annual Beat the Heat programme began again this year in May, with the routine inspection of facilities, which “kick-off the programme every year,” according to Mohamed, and “range from checking the cleanliness of on-site ice machines to sending ice and water samples to the lab for testing, to make sure no bacteria grew and contaminated the water over the winter, when the machines are not in use.” 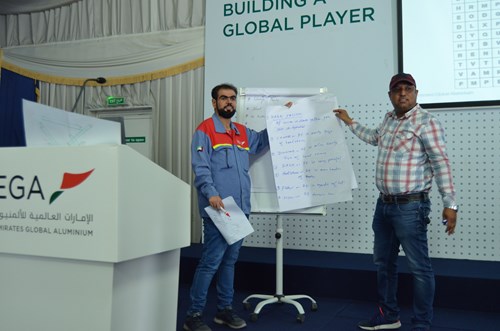 During these inspections, Mohamed and the other six members of his team also inspect water coolers, air conditioners and other operational utilities to avoid any breakdowns when temperatures by ensuring they are in optimal condition at the beginning of the summer.

Now at the height of the summer season, the programme is in its ‘Hydration Monitoring’ phase, which, Mohamed says, “is the most important phase,” with a focus not only on making sure employees are getting enough water, but also that they are getting enough electrolytes.

Sodium, potassium, chloride, calcium, magnesium and phosphate are examples of electrolytes, all of which help balance your body’s levels of water and acid (pH). Electrolytes are also responsible for helping your body move nutrients into your cells and waste out of your cells, while at the same time making sure your nerves, muscles, heart and brain work the way they should.

Put simply, Mohamed explains, “Electrolytes are the minerals your body needs to function at the most basic level. The more you sweat, the more of them you lose. So it’s supremely important that colleagues working across operational sites are getting enough electrolytes—about 500-millilitres worth a day.”

To make absolutely sure employees are getting enough water and electrolytes, Mohamed’s team, as part of Beat the Heat, is now conducting twice-daily hydration tests, which involve on-site employees providing a urine sample at the start of their shift and again in the middle of their shift.

Previously, the second test was conducted at the end of the shift but was recently moved to the middle because, Mohamed says, “the middle of the shift, after employees have been focused less on hydration and more on work, is when we would normally expect to find lower levels of hydration. But so far, we haven’t seen a dramatic decrease in hydration levels mid-shift, which makes me proud, because that means employees are really making an effort to come to work well hydrated.”

Overall, these trends are an indication that the majority of operational staff working on site are changing their behaviour in response to these tests, “and that’s a good thing,” Mohamed explains, “because the result is more and more employees are coming to work well hydrated. By incentivising this largescale behaviour change, these tests are also encouraging employees to take greater initiative and personal responsibility for their own health on the job.”

The positive impact of Beat the Heat on EGA’s collective health and wellness is massive and measurable, with 2019 marking the first time the company recorded zero incidences of heat-related illness and, Mohamed beams, “that made us very proud.”

In the event an employee is found to be dehydrated before his shift, they must stay in a cool place and drink plenty of water with electrolytes. They are not allowed to work outside until they are sufficiently hydrated.

Even greater preventive measures are taken for employees who are new to the Gulf or have recently returned from leave in cooler climates. “For these employees,” Mohamed says, “we make sure they are given time to acclimatise to the hot conditions before taking up their normal duties.”

This June, conditions were even hotter and more humid than usual, resulting in one employee being sent to the Medical Centre. “Because his symptoms were relatively minor and detected immediately, his recovery was swift. But,” Mohamed demurs, “no matter the uncharacteristically hot weather, or however minor the incident may have been, the fact that we had one at all was motivation enough to do even more to ensure it didn’t happen again.”

As a result, EGA has not recorded another heat-related incident since, “and we are absolutely committed to getting to the end of September, when the weather cools, without a second one.”

But ultimately, for the success of Beat the Heat, full credit must be given to the employees themselves, Mohamed says:

Heat for us is not just about protecting against the external weather conditions. It’s also about accounting for and protecting against the internal industrial processes that generate additional heat. I’ve personally gone in between the reduction cells, where the temperature reaches as high as 67 degrees. I am taking measurements for a couple of seconds but I can feel the heat hitting my bones. The fact that we can keep safe in these conditions is a credit for all of us.

There remains, however, one person who Mohamed is still desperate to lead by example: “My wife,” he laughs. “I’m a father of five and all of kids understand the importance of keeping hydrated. But it’s been a challenge getting my wife to drink even just one-and-a-half litres a day.”

In the meantime, Mohamed can rest assured that, in leading by example, he and his team have measurably improved the hydration, health and safety of some 8,000 employees by running Beat the Heat programmes and trainings across both EGA sites every summer.