Designing EGA’s purpose for the future

Fahima - Badri, who leads brand and visual communications at Emirates Global Aluminium, studied at one of the world’s most renowned art institutions, the Rhode Island School of Design. It should therefore come as no surprise that, at EGA, she is known for her creative ‘eye’.

Fahima discovered her passion for design at an early age, during trips overseas with her parents, when she first came face to face with some of the world’s greatest works of art. When asked what artwork she found particularly inspiring, Fahima sighs: “There are just so many, but if I had to pick, I would say Michelangelo’s Sistine Chapel.”

“Looking up at that masterpiece as a little girl,” she continues, “I was just awestruck. Not only by its sheer beauty and magnitude, but also by the thought of Michelangelo painting each intricate detail some 500 years ago, whilst laying on his back, on a ladder, more than 20 metres off the ground. In that single experience, I came to appreciate that creating truly inspiring art not only takes genius, but a lot of hard work.”

When it comes to fulfilling her own artistic potential, there is no question Fahima has taken Michelangelo’s lesson to heart, applying just as much hard work as natural-born talent to her craft. 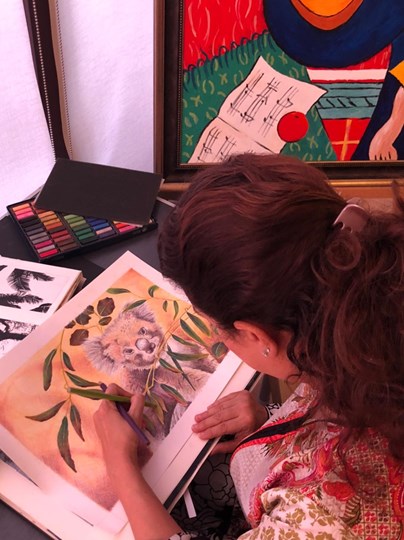 After graduating with a degree in Graphic Design from RISD in 1997, Fahima moved to New York, where she honed her skills at an international design firm before moving back to Dubai to pursue another creative challenge: advertising.

In 2003, Fahima made another career move, this time to Dubai Aluminium (which merged with Emirates Aluminium in 2014 to form EGA). Here, she would expand her creative skillset even further, in ways she never imagined.

“When I joined DUBAL, there was so much opportunity to add more creativity to the company’s internal and external communications. Wanting to make the most of that opportunity is what pushed me to evolve my work into a blend of pure design and strategic communications,” she says.

In many ways, Fahima thinks, her career has evolved in tandem with the entire communications industry.

“With the rise of the internet and social media, organisations now place equal emphasis on not telling their story through both words and visuals. From creative graphic to an artfully designed logo, the power of visual storytelling has enabled companies to communicate their brand in more authentic, unique ways that make a profound impact—much in the same way the paintings and monuments of my childhood made such an impact on me,” she says.

Over the course of Fahima’s career at EGA, her passionate dedication to creative design and strategic communications has shown through her work again and again, from heading into work at 2 a.m. to get the exact ‘right shot’ in the early dawn light, to hustling in the pre-digital era to get her team’s creatively designed brochures to an overseas event after missing a courier deadline.

But for Fahima, it’s her most recent work on EGA’s new Purpose and Culture that she considers to be her most challenging and rewarding creative project to date. 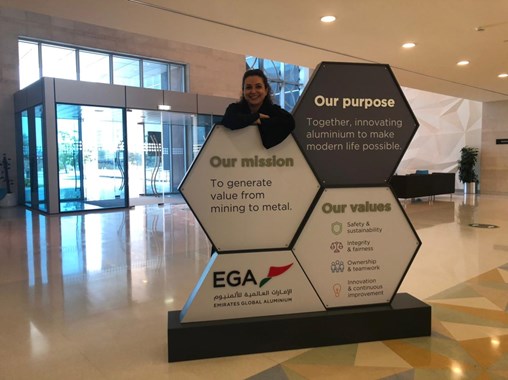 EGA’s leaders believe that organisations driven by a clear purpose and united by a shared culture perform better. They called for a fresh articulation of EGA’s Purpose and Culture, as part of wider business transformation to improve EGA’s global competitiveness.

In the midst of the COVID-19 pandemic, Fahima answered this call, in collaboration with EGA’s Senior Vice President of Corporate Affairs, Simon Buerk.

“Our purpose,” Fahima explains, “is our core reason for being. It is why EGA exists, and why we do what we do. Our culture is how we do things around here.”

In developing EGA’s purpose and culture, Fahima was determined to connect with as many of the 7,000-strong EGA team as she could. 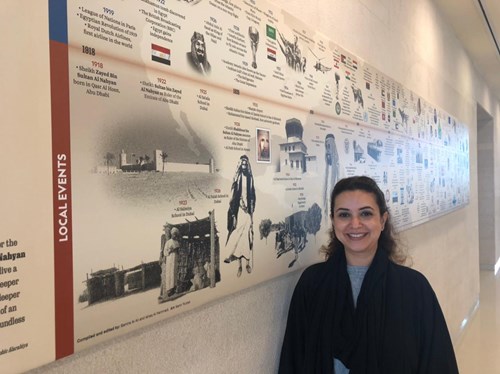 “We started this project with a company-wide survey on purpose and culture, in which over 90% of the organisation participated—across both EGA and our bauxite-mining-and-export facility in West Africa, Guinea Alumina Corporation.”

The goal of the survey was to involve all of EGA in thinking about and developing the company’s purpose and culture “because,” Fahima says, “at EGA, everyone has a role to play in our success.”

The initial survey was followed by employee focus groups that involved some 500 employees, as well as surveys that specifically targeted another 2,000, in addition to listening sessions with both employees and customers.

And all of that, during a pandemic.

“Can you imagine? Talking about purpose and culture and not being able to do it face-to-face?” Fahima asks, suggesting she almost can’t believe it herself. “Culture is about gatherings, and we couldn’t do it. We relied on Zoom and Microsoft Teams, and literally calling people one by one, to engage them in this massive, important effort for our future.”

From exhausting to exhilarating, Fahima drew energy from the acknowledgement of her colleagues, and the fulfilment that comes with knowing she was touching the hearts of EGA employees across the company.

“As a company, we have an amazing legacy from our founder Sheikh Rashid bin Saeed Al Maktoum, who started Dubai Aluminium in the 1970s as part of an audacious ambition to transform the prospects of his people and the UAE.

“Our new purpose is a simple but profound statement that resonates with Sheikh Rashid’s original vision whilst also explaining why EGA exists for the future:  Together, innovating aluminium to make modern life possible.”

But articulating EGA’s purpose and values, was only the beginning.

“One way to make it happen is giving employees the tools to articulate their own purpose and understand how it relates to the company’s,” Fahima says.

“An employee’s individual sense of purpose could be rooted in their pride to work at a company that make a product so important to the development of a more sustainable future. Or, it could be in a career that enables an employee to provide for their children. It could be many things, but whatever it is, everyone has a purpose that connects with EGA’s.”

A wide team of employees from across EGA are working on a series of initiatives to bring EGA’s new culture to life, ranging from a new focus on mental well-being to fresh ways to recognise performance.

Even more importantly, being a purpose-driven organisation with shared values means viewing every decision through that lens.

“Our Executive Committee developed a set of bold aspirations that we must achieve over the decades ahead to fulfil our purpose—for the world, for the societies in which we operate, for our people, and for our shareholders,” says Fahima.

“As a first step, these bold aspirations have already been incorporated in every department’s KPIs for this year.”

As she looks back over the last year, Fahima is immensely proud of all that EGA has achieved: “Many people at EGA have been here for a long time. That says something about us. We are collaborative and people are genuinely bonded. This is an amazing company to work for and I love my job as it has given me the opportunity to connect with people and bring fresh meaning to what they do.”