Najeeba Al Jabri and Shaikha Al Shehhi have always reached for the stars. Najeeba is currently Vice President of Technical at Emirates Global Aluminium, the UAE’s largest industrial company outside oil and gas. Shaikha is Senior Manager Process Control, and one of the most senior people in Najeeba’s team.

Elsewhere across EGA, more than 400 women join Najeeba and Shaikha, working at all levels to chart a new path for Emirati women in science, technology, engineering, and mathematics (STEM) and heavy industry.

Late last week, on the eve of Emirati Women’s Day, EGA marked the occasion by announcing its target to increase women’s representation in supervisory positions to 25 per cent by 2025. “This commitment by EGA is yet more proof of the vital role women must—and will—play in the continued growth and diversification of UAE industry to build a more sustainable future for all the nation’s people, regardless of gender,” says Shaikha. “As a woman working at EGA for 16 years and one of the most senior people in EGA operations today, my ambition is to chart a path forward for women in heavy industry and manufacturing—a sector traditionally dominated by men but wherein women are just as capable of achieving success. To prove that, I am committed to continuing to grow and achieve.”

Najeeba is similarly committed to continuing to grow and succeed, motivated by her desire to inspire more women to enter and thrive in traditionally male-dominated industries. Indeed, since 2001, when she began her career as the first woman in the entire Middle East aluminium sector to work as an operations engineer, Najeeba’s motto has been: “I can”. 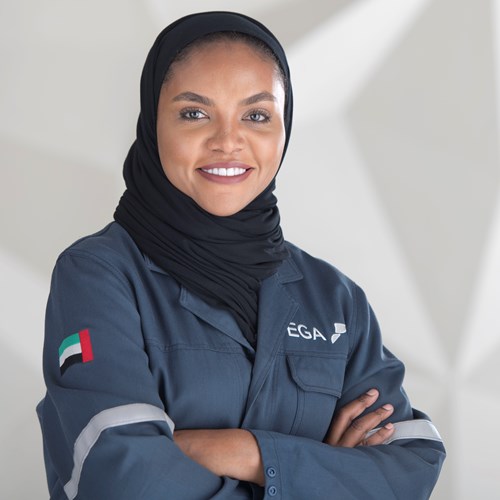 From carrying heavy loads to working in the hottest of conditions, Najeeba has never let gender stereotypes hold her back. “I even poured myself into crane training, which wasn’t mandatory,” the mother of three daughters recalls, adding: “I wanted to make sure that, if I was going to work in EGA Operations, I was not going to shrink from any responsibility or opportunity—no matter how difficult—just because I was a woman.”

Proving herself was, according to Najeeba, a matter of doing things “smartly”, by which she means: “always making sure I was out in front of my colleagues, getting the job done. I never shied away from things”.

But this go-getter trailblazing hasn’t been easy for either Najeeba or Shaikha—though you’d certainly never hear them complain. Their male colleagues, on the other hand, are among the first to admit that Najeeba and Shaikha are all the more impressive because of the many gender stereotypes they chose to overcome, all while excelling in their jobs.

“Years ago, it was obviously a male-dominated place and I think, when Najeeba took over Reduction, there was some doubt—and that was rooted in gender bias,” says EGA Manager of Plant Optimisation and Raw Materials, Shane Polle, who has worked in Najeeba’s department for the past five years, reporting directly to Shaikha for the past two. “When Najeeba was promoted to EGA Vice President of Technical in 2013,” Shane remembers, “even some of the younger female graduates were not shy to say things like: ‘Why is she running Reduction? That’s a man’s job’. Those comments really surprised me, especially coming from young professional women. It just goes to show how pervasive the gender stereotypes were at the time.”

For many of the same gender-biased reasons, Shaikha also faced many additional challenges when climbing her own management ladder. Monitoring molten aluminium, running through complex mathematical calculations in her head, and working on the factory floor in 60-degree heat are, after all, not roles in the past assigned to women—but that’s what Shaikha’s job entails, and she carries out the tasks unflinchingly.

Through sheer grit, confidence and never letting their gender be the reason to doubt their own capabilities, both Najeeba and Shaikha have, without question, “normalised women in these roles, and those people who doubted them aren't here anymore. So common sense won out,” says Shane.

When asked how she did it, Shaikha, like Najeeba, humbly demurred: “It’s all about how you perform.”

“our industry is 24/7, 365 days a year. We have emergencies that can be at midnight, or early morning or on weekends. Somebody has to be on deck to handle those emergencies and get the job done. Why not me?” Shaikha asks, before insisting: “I don’t doubt I can do it, but some do, because I am a woman. That means I have to go above and beyond in proving that I am capable and willing. If someone calls me at midnight, I’m there. In peak summer, I’m outside under the sun, or on the factory floor, alongside my male colleagues, working in exactly the same tough conditions to get the job done. I leave no room for doubt.”

Looking ahead, the two women are optimistic about the UAE’s future and women’s role in it.

In particular, Najeeba is excited for her eldest daughter, Alia, aged 11, who has already demonstrated a keen interest in outer space—another traditionally male-dominated field in which Emirati women are paving the way forward, both for themselves and the nation. Last year, women made up 80 per cent of the science team that launched the UAE’s Hope Probe to Mars, the Arab world’s first interplanetary mission.

“That mission and its ongoing success is a reminder of how far the UAE and Emirati women have come,” says Najeeba. “In 50 years, I envision Alia being another Emirati success story—both for future generations of Emirati women in STEM, and for the entire nation.”

In fact, both Najeeba and Shaikha agree there is no better time or country for women to pursue a career in STEM than right now in the UAE, where at university Emirati women are not only outpacing their male peers, but also their female counterparts across much Europe and North America.

According to a global analysis by the World Economic Forum, less than 30 per cent of STEM researchers worldwide are women. And in classrooms worldwide, the numbers are even fewer, with women representing less than 10 per cent of students enrolled in STEM courses.

In the UAE, however, women represent a majority (56 per cent) of university STEM graduates, according to the latest government figures. And of students currently enrolled in university, women make up 44.5 per cent of engineering students in the UAE, compared to 20 per cent in Germany and 18 per cent in the UK.

These achievements follow a series of government-led, industry-backed initiatives to diversify away from oil towards a high-skilled, knowledge-based economy fuelled by homegrown innovations and talent. To make this economic vision a reality, EGA is empowering women to achieve their full potential by following in the footsteps of such trailblazers as Najeeba and Shaikha.