The Siemens Energy H-class gas turbine, a leading technology in efficient power generation, is the heart of the new power plant. Over the coming months, other facilities of the plant will be completed and integrated to achieve a generation capacity of over 600 megawatts of electricity. Full completion of the project is expected in the summer.

The new power block at EGA is being developed by JA Power & Water Co, a joint venture formed by Mubadala and Dubal Holding. EGA intends to buy power from the joint venture for 25 years following commissioning.

Use of the H-class gas turbine will further improve the efficiency of power generation at EGA, saving natural resources and reducing costs and environmental emissions.

The installation of an H-class turbine aligns with the UAE Energy Strategy 2050, which aims to reduce the nation’s carbon footprint of power generation by 70 per cent and to increase energy efficiency by 40 per cent.

The new power block is expected to lower greenhouse gas emissions from EGA's power-generation and aluminium-smelting operations at Jebel Ali by some 10 percent, the equivalent of planting more than 17 million trees each year. NOx emissions are expected to decrease by as much as 58 percent. NOx is also emitted by motor vehicles and is amongst a group of emissions targeted for reductions under ‘UAE Vision 2021’ to improve local air quality. The NOx emissions reductions expected as a result of the new power block are equivalent to removing more than 850,000 cars from the road.

The project is the first time a Siemens Energy H-class gas turbine has been deployed in the global aluminium industry. 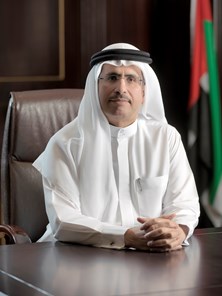 His Excellency Saeed Mohammed Al Tayer, Vice Chairman of EGA, said: “This ambitious project is in line with the directives of His Highness Sheikh Khalifa bin Zayed Al Nahyan, President of the UAE; His Highness Sheikh Mohammed bin Rashid Al Maktoum, Vice President and Prime Minister of the UAE and Ruler of Dubai, and His Highness Sheikh Mohamed bin Zayed Al Nahyan, Crown Prince of Abu Dhabi and Deputy Supreme Commander of the UAE Armed Forces to enhance sustainable development in the UAE. This project which includes a leading technology in efficient power generation supports the objectives of the UAE Vision 2021 and the UAE Centennial 2071, which outlines the path for a brighter future for generations to come by making the UAE the world’s leading nation. We look forward to the successful completion of this project and for it to contribute to our nation’s prosperity for decades to come.”

Abdulnasser Bin Kalban, Chief Executive Officer of EGA said: “We are making good progress on delivering this important project, despite all the challenges of 2020. Most importantly, the work to date has been completed safely with zero lost time injuries. This new power plant will improve the efficiency of power generation at EGA even further. That means lower costs in natural gas, and lower costs to the planet. Many applications of aluminium contribute to sustainability, but the environmental impact of how it is made also matters.”

Dietmar Siersdorfer, Managing Director of Siemens Energy in the Middle East and UAE, said: “This is a landmark project, as the first Siemens H-class globally to power an aluminium smelter, the most efficient power plant in the UAE and the most efficient in EGA’s fleet. This proven technology will help to decarbonise the UAE’s industrial sector and we look forward to continuing to work with EGA, Mubadala and Dubal Holding.”

Once the new power block is fully operational, five older, smaller and less efficient turbines at EGA’s Jebel Ali site will be put on standby for use only in emergencies.

EGA requires electricity for aluminium smelting and other industrial operations. EGA runs power plants at its sites in Jebel Ali and Al Taweelah with a current combined generating capacity of 5,850 megawatts, making the company the largest power-producer in the UAE after the Dubai and Abu Dhabi utilities with a similar generating capacity to New Zealand.

Earlier this year, EGA announced with Dubai Electricity and Water Authority that it has made the UAE the first country in the world to produce aluminium using the power of the sun. DEWA is supplying solar power from the Mohammed Bin Rashid Al Maktoum Solar Park on the outskirts of Dubai. EGA is marketing solar aluminium to global customers under the product name ‘CelestiAL’.

Siemens Energy is a leading global energy technology company, operating along almost the entire energy value chain. Siemens Energy was spun off from Siemens in September 2020 as an independent company with around 91,000 employees and operations in more than 90 countries.