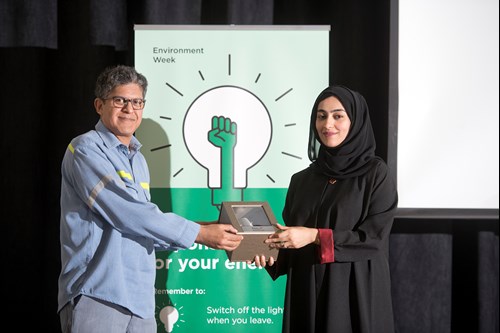 United Arab Emirates, 05 November 2018: Emirates Global Aluminium, the largest industrial company in the United Arab Emirates outside oil and gas, is this week calling on all its 7,000 employees to find ways to reduce energy consumption during its annual Environment Week campaign.

Producing aluminium is energy intensive and EGA has focused on research and development for more than 25 years to improve the energy efficiency of its smelting process.

However all employees have a role to play in reducing energy consumption, as simple actions like switching the lights off overnight in an office can, over a year, save greenhouse emissions equivalent to those generated by driving from Abu Dhabi to Muscat.

During the week EGA will host a workshop to develop new energy efficiency initiatives for experts from the company and the Ministry of Climate Change and Environment. EGA will also plant trees at its head office in Al Taweelah.

Salman Abdulla, Executive Vice President HSSEQ and Business Transformation at EGA, said, “Our business is energy-intensive, making energy one of our biggest costs and sources of environmental emissions. Whilst technology development has driven significant improvements in our energy efficiency, seemingly small actions like switching off computers at the end of the day can add up to big reductions if we all do them. That’s the message of Environment Week, and we hope our employees take it home with them too.”

EGA’s technology development, and earlier work since 1980, has reduced the amount of electricity required to produce each tonne of aluminium by 37.5 per cent.

EGA has natural gas-fired power plants at its sites in Jebel Ali and Al Taweelah to produce the electricity it needs for its industrial operations. EGA is the third largest power producer in the UAE after ADWEA and DEWA.