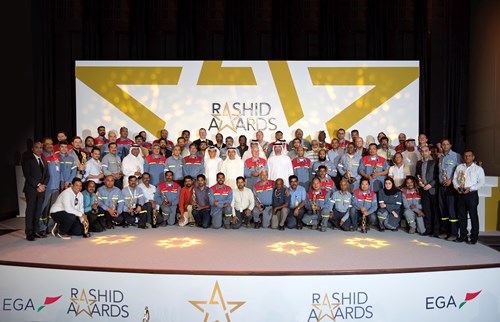 United Arab Emirates, 15 May 2018: Emirates Global Aluminium, the largest industrial company in the United Arab Emirates outside oil and gas, today recognised the 33 employees at the company’s paste plant in Jebel Ali for completing 22 years without a single injury leading to time off work.

The Jebel Ali paste plant manufactures the material for anodes, which are used in the aluminium smelting process. The paste plant team has worked more than two million hours over the past 22 years, producing over 7.8 million anodes.

During the same period they have completed 84 different major refurbishments, projects and improvements on-site, boosting efficiency and bolstering production from 168 thousand tonnes of paste in 1996 to more than 505 thousand tonnes in 2017.

Mr. Kalban said: “Our annual Rashid Awards recognise those who go above and beyond to make a measurable impact on the business and in their teams. Safety milestones like this achievement at the Jebel Ali past plant are only possible through a strong safety culture shared by all, which is why we celebrate them together.”

During the Rashid Award ceremony, 43 awards were received for exceptional performance. Other categories included occupational health and environmental responsibility.

The awards also recognize the best suggestions made in the EGA employee suggestion scheme for 2017. Last year EGA won two gold awards for continuous improvement from Dubai Quality Group, and has previously received international awards for its suggestion scheme and individual ideas including at Ideas America.