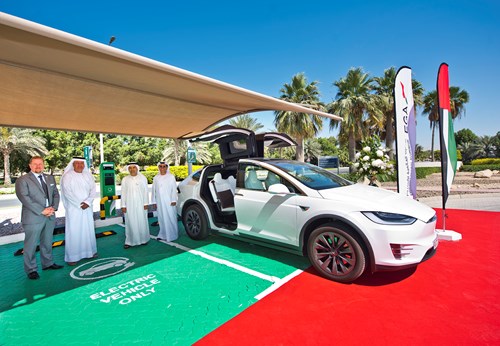 United Arab Emirates: Emirates Global Aluminium, the largest industrial company in the United Arab Emirates outside oil and gas, has opened its first electric car charging station at its site in Jebel Ali in support of the Dubai Green Mobility Initiative.

The opening was attended by EGA executives, as well as representatives from the Dubai Electricity and Water Authority.

Four EGA employees who already own Tesla vehicles also attended, and will be the first to regularly use the charging station.

The Dubai Green Mobility Initiative was launched by the Dubai Supreme Council of Energy in 2016, and aims to increase the proportion of electric and hybrid vehicles in Dubai to two per cent of new sales by 2020 and 10 per cent by 2030. Transportation is one of the largest sources of greenhouse gas emissions in Dubai and exhaust fumes from internal combustion engines also affect local air quality.

As a major producer and consumer of electricity for its operations, EGA is a member organisation of the Dubai Supreme Council of Energy.

Abdulla Kalban, EGA’s Managing Director and Chief Executive Officer, said: “The vision of His Highness Sheikh Mohammed bin Rashid Al Maktoum, Vice President and Prime Minister of the UAE and Ruler of Dubai, is for Dubai to be the world’s smartest city and switching to green transportation is part of that future. Making charging stations available where people need them is critical for the widespread adoption of electric vehicles so we are pleased to play our part.”

Lubna Dhuhair, Senior Analyst at EGA and one of the four Tesla owners, said: “I decided to invest in an electric vehicle because of the fuel cost savings, but also because it allows me to play an active role in our Leaders’ initiative to building a more sustainable and green Dubai. Having a charging station at EGA will be convenient, and I hope it will encourage more of my colleagues to switch to electric vehicles to help our environment.”

EGA aspires in all its operations to be measured amongst the world’s leading metals and mining companies in meeting its environmental and social responsibilities. Since 2010, the company has invested almost $1 billion in environmental technologies and facilities to reduce and manage emissions and waste.

EGA has focused on research and development for more than 25 years to reduce the amount of energy required to produce each tonne of aluminium, curbing both costs and emissions.