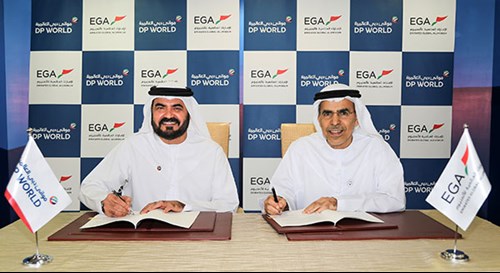 The agreement extends the strategic partnership between the two companies, facilitating the storage and transportation of aluminium manufactured by EGA. As part of the agreement, EGA is leasing a dedicated storage area that is the largest the company has ever used at Jebel Ali Port and which will further ease the export of EGA’s metal worldwide.

EGA’s new yard is over 175,000 square metres, the equivalent of more than 24 football fields. It has storage capacity for almost 60,000 tonnes of metal and up to 1,200 TEUs (twenty-foot equivalent container units).

The yard is strategically located within the port to ease the movement of EGA metal to ships for export.

DP World and EGA have worked together since the late 1970s, playing a major role in the economic diversification of the UAE.

Around 90% of EGA’s metal is exported and its aluminium is the largest made in the UAE export after oil and gas, making the UAE the fifth-biggest aluminium producing nation.
EGA was the largest ‘premium aluminium’ producer in the world in 2017.

DP World Group Chairman and Chief Executive Officer, Sultan Ahmed Bin Sulayem, said: “Our agreement with Emirates Global Aluminium is an opportunity for two world-leading UAE companies to work together to support Dubai and the UAE’s economy. It’s another step towards strengthening our nation’s diversifying economic base. Establishing and sustaining a robust supply chain is vital to achieving this goal as envisioned by HH Sheikh Mohammed Bin Rashid Al Maktoum, Vice President and Prime Minister of the UAE and Ruler of Dubai.
“DP World and EGA have a 40-year history and our combined success is testament to the ingenuity and capabilities of Emirati enterprise. This new agreement opens the door to an enhanced level of collaboration. DP World will continue to innovate and develop trade solutions to add value to our partners and enable greater trade for all.”

Abdulla Kalban, Managing Director & Chief Executive Officer of EGA, said: “Emirates Global Aluminium has customers in more than 60 countries, and our metal makes modern life possible. Proximity to the UAE’s efficient ports is one of our global competitive advantages, and we are glad to extend our decades-long partnership with DP World at Jebel Ali Port.
“EGA and DP World are two champions of economic diversification in the UAE, and that makes our work together important not just for our companies but also for our nation.”

EGA will benefit from DP World’s range of customised services, catering to various types of its products that require specialised handling, including washing, re-bundling, segregation, stuffing, and offloading, as well as one month’s free storage.

Jebel Ali Port supports EGA’s business with a network of over 140 direct ports of call and more than 80 weekly sailings – the best in the region. It also serves as hub to the most extensive trade network in the region, enabling trade across the Middle East, North Africa, East Africa and South Asia, and services to a market of over one billion people.
DP World, UAE Region recorded a 4% year-on-year increase in throughput to 15.4 million TEU in 2017 and handled 3.8 million TEU in the first quarter of 2018.