EGA employees wrap up Year of Giving after more than 2,700 volunteer hours of service 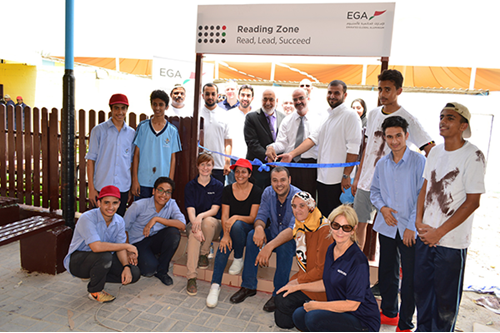 EGA employees wrap up Year of Giving after more than 2,700 volunteer hours of service

United Arab Emirates, 02 January 2018 --- Emirates Global Aluminium, the largest industrial company in the United Arab Emirates outside oil and gas, wrapped up the Year of Giving after a host of corporate social responsibility initiatives that aimed to support community development and deliver social and environmental impact. Over the year, EGA employees recorded 2,790 hours of volunteer work whilst participating in multiple companywide CSR schemes.

Abdulla Jassem Bin Kalban, Managing Director and Chief Executive Officer of EGA said: “EGA prides itself on being socially aware and committed to the welfare of all those living in the UAE. The Year of Giving has given us many opportunities to support the community in 2017, as well as the added motivation to continue to give back to the nation after the year has ended.” 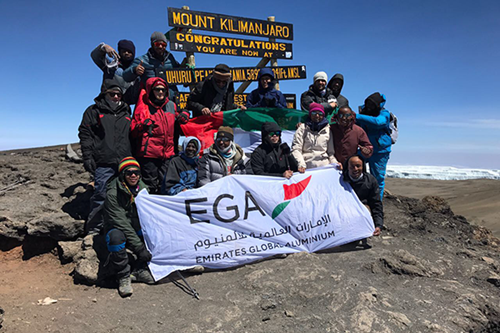 Ten employees from EGA were sponsored by the company for a seven-day climb on Mt. Kilimanjaro, Africa’s highest peak. Together the team raised AED 210,000 for Al Jalilah Foundation, a non-profit organisation that provides medical education and research. The money will be used to support individuals in the UAE with missing limbs.
Volunteers from EGA also contributed to the construction of reading zones for school children in Salma Al Ansariya School and Dubai National Charity School. During construction, EGA employees mentored a group of students on simple project management skills as well as providing graphic design, technical and administrative support, team building, and donating books. In addition, the company recently donated a bus to transport students with special needs to and from the Rashid Centre for The Determined Ones for specialised therapies and education services.

Ameera Al Marzooqi, a graduate trainee at EGA who was part of the volunteer team for the construction of reading zones, said: “At EGA, we know we are always encouraged to volunteer for good causes and it is a matter of pride to be part of a company that puts such a high priority on CSR. This year many of us have been given the opportunity to contribute to the welfare of others in a meaningful way. We look forward to the next year and the chance for EGA employees to be part of new initiatives.”
Some 1,436 volunteers from EGA took part in various activations during the course of 2017.

Caring for people and the environment 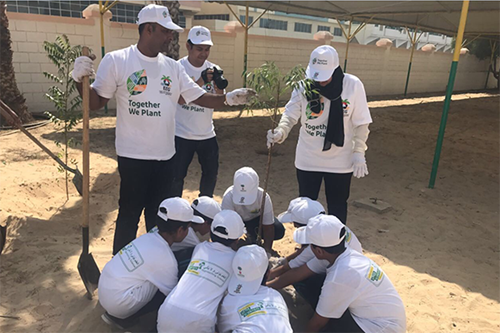 As part of its environmental protection activities, EGA made Earth Hour a weekly event earlier in the year and saved 24,395 kWh in three months by switching off non-essential electrical devices for an hour every week. Furthermore, 1500 employees participated in the annual Emirates Environment Group Clean Up UAE campaign at EGA’s Jebel Ali and Al Taweelah operations to remove 1,630 kilograms of waste from the two sites.
EGA also collaborated with Emirates Environmental Group to plant 167 trees in schools in both Abu Dhabi and Dubai. Upon maturity, the planted trees will mitigate carbon dioxide emissions, contributing to environment protection and the sustainable development of the UAE.

As part of Breast Cancer Awareness month, EGA volunteers distributed 2,000 pink caps to the public in an effort to raise awareness. A company-wide Pink Day event was also held at EGA Jebel Ali and EGA Al Taweelah, where female employees were provided free screening at the company’s medical facilities. Staff participated generously in a fund-raising campaign by Friends of Cancer Patients for cancer research and treatment for underprivileged women.

The company participated in the “It Goes Back to You” campaign that provides Iftar for patients at Dubai Health Authority hospitals during Ramadan, with a AED10,000 donation.

Supporting engineers of the future

EGA supported education of young people by conducting a work-readiness program under INJAZ UAE, reaching out to 765 students to provide innovation camps for business solutions, training and job shadow days during which EGA volunteers mentored the students.

The company further launched a new national programme, ‘Engineer the Future,’ to encourage high school students to consider advanced studies and careers in science, technology, engineering and mathematics. This program aims to reach 8,000 students in 30 schools across the nation this academic year with interactive learning sessions on aluminium and the fundamental science on which the aluminium industry is based. As of December 2017, 1,264 students have attended the program.