EGA demonstrates support for entrepreneurship and innovation amongst UAE youth 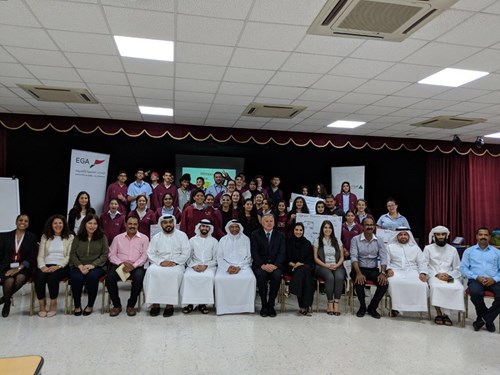 EGA demonstrates support for entrepreneurship and innovation amongst UAE youth

United Arab Emirates, 22 February 2018 --- Emirates Global Aluminium, the largest industrial company in the United Arab Emirates outside oil and gas, recently sponsored an Innovation camp (I-camp) at the International School of Arts and Science, in collaboration with INJAZ UAE.

The half-day workshop was designed to help students learn real-world business skills, by asking them to brainstorm innovative solutions that help to overcome business challenges. Students were briefed on EGAs business, and provided with an overview of aluminium’s contribution to everyday life. 50 students were given the opportunity to engage in the workshop, with mentorship provided by both EGA and Injaz.

The session ended with 8 teams pitching their business model – centred on aluminium based innovation – to a panel of judges. The winning team will now be invited to shadow EGA mentors for a day, at the company’s headquarters.

The innovation camps are designed to foster an understanding of the world of work and the spirit of entrepreneurship in students. EGA plans to continue engaging students through I-Camps throughout the year, and intends to reach 500 students in 2018. The next I-Camp will take place on the 1st of March.

Khalid Buhmaid, Senior Vice President, Government Relations at EGA, said: “Young people are the change-makers of tomorrow, and the student presentations demonstrated a desire to take an active role in the development of creative solutions - which bodes well for this country’s educational potential. We’re committed to the continued development of entrepreneurship and innovation in the UAE, and initiatives like I-Camps, which bridge the gap between work and learning, go a long way towards achieving that.

The innovation camp comes as part of EGA’s commitment to UAE Innovation Month. Earlier this month, EGA announced that it will be platinum sponsor for the first UAE Innovation Award, organised by Dubai Quality Group to encourage a culture of innovation in the private sector. The company also recently announced over AED 4.7 million in savings over the past year through the implementation of employee suggested innovations designed to conserve energy. In total, over 65,000 MWHr was saved annually over the course of 2016 and 2017.

EGA has a history of collaboration with INJAZ UAE, and the two have supported the education of young people since 2013 by conducting a number of work-readiness programs - reaching out to 765 students to provide innovation camps for business solutions, as well as training and job shadowing opportunities.

EGA also launched the ‘Engineer the Future’ future programme last year, to encourage high school students to consider advanced studies and careers in science, technology, engineering and mathematics. This program aims to reach 8,000 students in 30 schools across the nation this academic year, with interactive learning sessions on aluminium and the fundamental science on which the aluminium industry is based. As of December 2017, 1,264 students have attended the program.

EGA has developed its own technology in the UAE for over 25 years and has also focused on continually improving its operations for decades by engaging its entire workforce. In 2016, EGA became the first UAE industrial company to licence its core industrial process technology internationally. Today, EGA’s home-grown technology is amongst the most efficient in the global aluminium industry.

EGA has also used this technology in every smelter expansion since the 1990s and has retrofitted all its older production lines. In 2016 EGA became the first UAE industrial company to license its own large-scale industrial technology internationally.