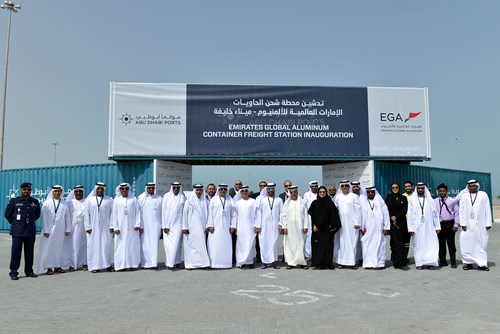 New container freight station will improve logistics efficiency and environmental performance by reducing truck movements in KIZAD by over 290,000 kilometres per year

United Arab Emirates: Emirates Global Aluminium, the largest industrial company in the United Arab Emirates outside oil and gas, and Abu Dhabi Ports have opened a facility which will reduce trucking of EGA’s aluminium within Khalifa Industrial Zone Abu Dhabi (KIZAD) by over 290,000 kilometres per year, reducing costs and environmental emissions.

The new container freight station will be used to load metal into containers for transfer onto ships for export. It has been purpose built by Abu Dhabi Ports close to EGA’s Al Taweelah site to reduce the trucking distance for each consignment by approximately 17 kilometres.

Last year EGA shipped some 600,000 tonnes of aluminium from Khalifa Port, requiring over 17,000 truck movements from EGA’s site to the quayside. Total emissions savings from shortening the journey to waiting ships are expected to be over 2,000 tonnes of CO2 equivalent per year, which is similar to removing some 450 cars from the UAE’s roads.

Senior management of both EGA and Abu Dhabi Ports attended an opening ceremony for the new container freight station today.

Abdulla Kalban, EGA’s Managing Director and Chief Executive Officer, said: “We are always looking for ways to improve our efficiency, saving costs and protecting the environment. Relatively small changes like this can have a big impact when they are magnified by the scale of EGA’s business.”

Commenting on the new facility, Captain Mohamed Juma Al Shamisi, Chief Executive Officer of Abu Dhabi Ports, said: “At Abu Dhabi Ports, we strive to support our customers’ logistical and operational requirements through careful and forward planning of infrastructure. We are making every effort to enhance logistics efficiency and reduce carbon emissions by reducing the distance of trucks transporting aluminium from Emirates International Aluminium to the quayside, which adds value both commercially and environmentally. Our efforts to reduce environmental footprint coincide with the UAE tarto reduce carbon emissions.”

EGA exports its metal to customers in more than 60 countries around the world, using 20 different shipping lines to ship to over 70 global ports. EGA’s aluminium is the biggest made-in-the-UAE export after oil and gas.

Journey times from the UAE’s central geographic location average 25 days to southern Europe, 25 to 30 days to destinations in Asia, and 40 days to North America, enabling just in time deliveries.