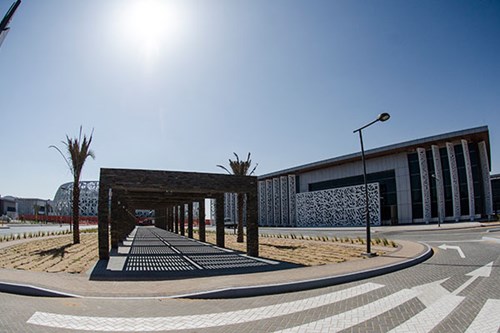 The new office complex is the administrative heart of EGA, which was formed through the merger of Emirates Aluminium (EMAL) and Dubai Aluminium (DUBAL) in 2014.

Abdulla Kalban, EGA’s Managing Director and Chief Executive Officer, said: “We integrated our predecessor companies to form EGA some years ago, but the opening of our new head office is the final symbolic step. This complex is now the administrative centre of our business, as well as the centre of the broader UAE aluminium sector of which EGA is the heart and foundation.”

EGA supplies aluminium to approximately 26 companies in the UAE, including several that are located near to its Al Taweelah site in KIZAD. The industry as a whole employs roughly 30,000 people, making it the largest employer among the UAE’s energy intensive industries.

The head office complex is designed to resemble a leaf from the air, a nod to the company’s aspirations for productivity and growth and an affirmation that it will conserve water resources, promote clean energy and implement green expansion plans in line with UAE Vision 2021. Arabic calligraphy also adorns the facades of several buildings, an allusion to Emirati culture.

A mosque, function-based training facilities, an auditorium, an exhibition area, recreational facilities, and a commercial centre are among the other facilities on the campus.

A team of 10 young professional completed the construction of the head office complex within the target timeline. Together, the HQ Team identified strategies for design and construction that would deliver the buildings at the lowest cost without compromising standards of quality, performance or aesthetics.

In fact, each building achieved an Estidama pearl 2 on the Pearl Building Rating System, a green building classification under the Urban Planning Council of Abu Dhabi (UPC).

Working in accord with Abu Dhabi Vision 2030, the team also ensured that the building was constructed from recyclable materials wherever possible and locally-sourced aluminium and steel. Walkways and outdoor areas are made green with native plants and local palm trees reducing water consumption, further ensuring the sustainability of the complex.