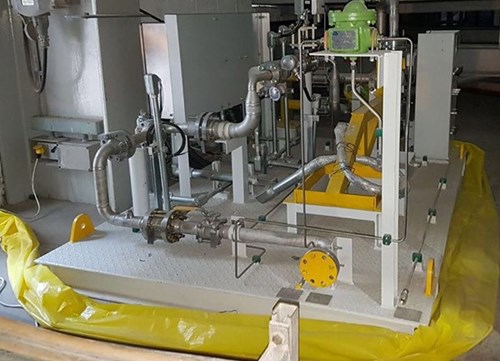 EGA and GE are working with the Ministry of Climate Change and Environment under the Government Accelerators programme, an initiative of His Highness Sheikh Mohamed bin Rashid Al-Maktoum, Vice President and Prime Minister of the United Arab Emirates and Ruler of Dubai, to achieve rapid progress in meeting Government objectives.

The programme objective is to reduce EGA’s NOx emissions by 10% by the 26 February.

The installation of the machine, a water skid, at EGA’s Jebel Ali power plant will reduce NOx emissions by the equivalent of taking 160,000 cars off the UAE’s roads and is the largest single work element in reaching the Government Accelerators target.

The water skid was completed and arrived in Dubai in just 70 days, compared to an industry norm of 210 days for similar projects.

EGA is the largest industrial company in the United Arab Emirates outside the oil and gas industry, and after DEWA is the country’s second largest electricity producer to meet the power needs of its aluminium smelting operations. EGA has its own power stations at both Al Taweelah and Jebel Ali.

Abdulla Kalban, Managing Director and Chief Executive Officer of EGA, said: “This is a major milestone in our 100 day journey to achieve the target of the Government Accelerator program. It was a challenge to achieve this in a very short time-frame, the teams have worked day and night to making it possible and we are proud of the collaboration we have with the Ministry of Climate Change and the Environment and GE in achieving this.”

Joseph Anis, President and Chief Executive Officer of GE’s Power Services business in the Middle East and Africa, said: “We are honoured to collaborate with EGA to help meet the UAE’s National Agenda goals and sustainable development ambitions. The speed with which our teams delivered this important milestone underlines not only GE’s technological strengths in supporting industry demands for enhanced productivity, efficiency and environmental outcomes but also our on-the-ground presence and commitment to the customers and communities we serve.”

In addition to power stations, NOx is also emitted by motor vehicles and affects air quality. Success in the EGA’s overall Government Accelerators project will improve air quality by the equivalent of removing 280,000 cars and their emissions from the UAE’s roads.

Improving the air quality index to have clean air 90 per cent of the time is one of the national objectives set in UAE Vision 2021, with NOx one of four main air pollutants that is included within the calculation of this indicator.

The Government Accelerators programme combines mutual teams from the Government, the private sector and academia in various sectors to work together to achieve accelerated progress in Government objectives and strategic plans.