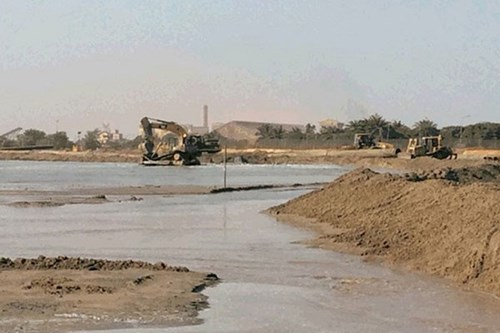 United Arab Emirates, 02 February 2017: Emirates Global Aluminium (EGA), one of the world’s leading primary aluminium producers and the largest industrial company in the United Arab Emirates outside oil and gas, today announced an early milestone in the development of its permanent bauxite mining and export facilities in the Republic of Guinea.

Jan de Nul, a Belgian marine contractor that also worked on the construction of the Palm Jumeirah in Dubai, completed a three month project for site infill and elevation of 50 hectares of land at Kamsar on the Guinean coast for a rail loop and bulk materials handling facilities.

Completion of the work is an early milestone in EGA’s $1 billion investment in the development of a bauxite mine, rail infrastructure and export facilities. The project is the largest greenfield investment in Guinea in four decades, will contribute 10 per cent to Guinea’s GDP, and create 4,000 direct and indirect jobs.

The site infill and elevation work itself created jobs for some 100 Guineans at peak. Work was completed with zero lost time injuries. Marine sand was piped to the site through a specially-built five kilometre pipeline, significantly reducing the need for truck movements in Kamsar town.

Bauxite is a mineral which is refined into alumina, the feedstock for aluminium smelters.

In a second phase of the Guinea project, EGA will build an alumina refinery in the country.

Guinea has around 7 billion tonnes of bauxite resources, over a quarter of the global total. Guinean bauxite is amongst the highest quality worldwide. EGA’s bauxite mine is in the Boké region of north-west Guinea, where it holds a concession on more than 1 billion tonnes of bauxite. Commercial production is expected to begin in 2018 and grow to 12 Mtpa. A railway extension is under development to connect the mine with Kamsar port.

More than 200 Guineans are being seconded over the next several years to EGA’s operations in the UAE to prepare them for roles at GAC. EGA is also investing to support communities near its operations in Guinea, opening community health centres, installing water wells, building schools, providing adult literacy and vocational training and protecting local fauna and flora.

Last October EGA inaugurated a container terminal facility at Kamsar Port in Guinea. This facility is being used for the export of bulk bauxite samples and the import of equipment for EGA’s construction project. On the completion of construction of EGA’s project it will be handed to the state for third-party use, creating a further boost for the local economy.