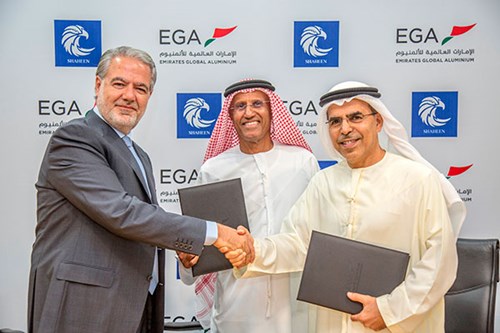 United Arab Emirates, 19 December 2017: Emirates Global Aluminium, the largest industrial company in the United Arab Emirates outside oil and gas, has signed a long term supply agreement with Shaheen Chem Investments LLC which paves the way for the construction by Shaheen of a chemical complex in Khalifa Industrial Zone Abu Dhabi.

Once it starts production early next decade, Shaheen’s ethylene dichloride and caustic soda plant will supply all its caustic soda output to EGA’s Al Taweelah alumina refinery for a period of 15 years. This will entirely meet EGA’s needs for this raw material.

Construction of the plant will significantly boost the UAE’s production of caustic soda, an important raw material in industries from petroleum products to chemicals manufacturing as well as alumina refining.

The new plant will be the first in the UAE to produce ethylene dichloride, which will be sold to third parties.

Ethylene dichloride and caustic soda manufacturing is a new industry for KIZAD and construction of the plant is expected to boost KIZAD’s role as an industrial centre for Abu Dhabi and the UAE.

The signing was witnessed by Abdelkareem Al Masabi, Executive Vice President, Ports of Abu Dhabi Ports which is the master developer and operator of Khalifa Industrial Zone Abu Dhabi.

Abdulla Kalban said: “The construction of a caustic soda plant next to our alumina refinery guarantees our supply of this vital raw material at competitive prices for years to come. I am pleased that EGA’s demand for caustic soda is creating further industrial expansion in Abu Dhabi, continuing EGA’s long-standing contribution to the diversification of our economy as we grow our own business.”

Rashed Al Suwaidi said: “We now look forward to building our plant at KIZAD to supply EGA with the caustic soda it needs. We are also excited to become the first producer of ethylene dichloride in the UAE and to later bringing vinyl chloride and polyvinyl chloride production to the country.”

Al Taweelah alumina refinery is the first to be built in the UAE and will meet 40 per cent of EGA’s alumina requirements.