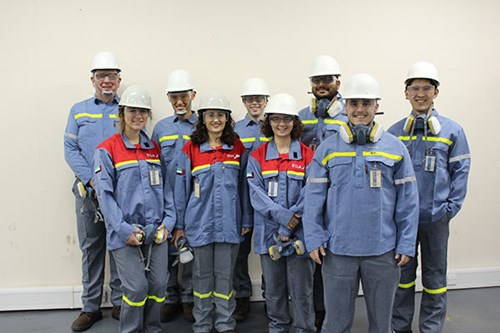 United Arab Emirates, 11 December 2017: Emirates Global Aluminium, the largest industrial company in the United Arab Emirates outside oil and gas, is hosting eight students from the Massachusetts Institute of Technology to work on six innovative practical research projects at the company as part of their post-graduate studies.

MIT is the leading research university in the United States with a 150-year history of advancing knowledge in science, technology, and other areas of scholarship.

EGA has an ongoing partnership with MIT’s David H. Koch School of Chemical Engineering Practice, a programme through which post-graduate students apply their academic knowledge and expertise by suggesting 'out of the box' solutions for industrial problems.

EGA has worked with the MIT programme since 2015. The programme has a history stretching back over 100 years and EGA was the first Middle East company to participate.

The students are working on new projects at EGA including exploring ways to improve maintenance, reduce emissions and improve productivity.

Abdalla Al Zarooni, Vice President of Technology Development and Transfer at EGA, said: “Working with MIT and other academic institutions in the UAE and internationally, brings fresh perspectives and solutions as we combine the latest academic thinking with our deep practical experience at EGA. I am looking forward to some innovative outcomes from this year’s MIT projects.”

Previous MIT research projects at EGA have led to technical and operational improvements at the company that have yielded savings of AED 2.7 million per year, as well as given EGA’s technical experts and MIT students opportunities to learn from each other.

EGA has also run its own technology development programme in the UAE for 25 years. EGA’s latest home-grown technology is among the most efficient and competitive in the global aluminium industry.

EGA has used its own technology for every smelter expansion since the 1990s, including the construction of Al Taweelah smelter in Abu Dhabi, which was the world’s largest single-site smelter when it was completed.