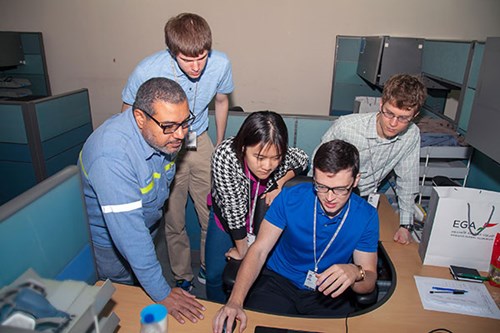 United Arab Emirates, 28 August 2017: Emirates Global Aluminium, the largest industrial company in the United Arab Emirates outside oil and gas, will work with the Massachusetts Institute of Technology on six new practical research projects at EGA later this year.

MIT is the leading research university in the United States.

The new projects extend EGA’s partnership with MIT’s David H. Koch School of Chemical Engineering Practice, a programme through which post-graduate students apply their academic knowledge and expertise by suggesting 'out of the box' solutions for industrial problems.

Dr. Alan Hatton, the director of the school, and Dr Brian Stutts, who runs the school’s projects with industrial companies, visited EGA to finalise the new projects.

EGA has worked with the MIT programme since 2015. The programme has a history stretching back over 100 years and EGA was the first Middle East company to participate.

Previous MIT research projects at EGA have led to technical and operational improvements at EGA that have saved over US$2 million as well as giving EGA technical experts and MIT students opportunities to learn from each other.

The 2017 projects range from improving maintenance programmes to reducing emissions.

Abdulla Al Zarouni, Vice President Technology Development and Transfer at EGA, said: “We work closely with local and international universities to combine the latest academic thinking with EGA’s decades of experience in aluminium smelting in order to find solutions to the industry’s technological challenges. We look forward to making new breakthroughs with MIT’s engineers later this year.”

Dr Hatton said: “Our six projects at EGA this year are challenging, but they each have the potential to advance chemical engineering as well as deliver tangible improvements at EGA. We work with innovative industrial companies in the United States and all over the world, and we are glad that the Middle East’s leading aluminium producer is among them.”

EGA has also run its own technology development programme in the UAE for 25 years.

EGA’s latest home-grown technology is among the most efficient and competitive in the global aluminium industry.

EGA has used its own technology for every smelter expansion since the 1990s, including the construction of Al Taweelah smelter in Abu Dhabi, which was the world’s largest single-site smelter when it was completed.

In 2016, EGA became the first UAE industrial company to license its own large-scale industrial technology internationally.