EGA veterans join more than 600 others at the company who have reached the 25 year milestone. 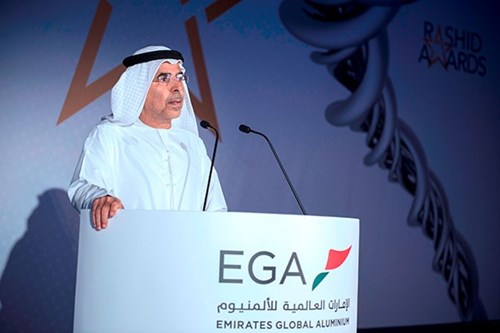 The group includes six UAE Nationals, and they join more than 600 employees who have already passed the milestone. The disciplines of this year’s honourees range from senior technicians at EGA’s smelters to senior executives.

EGA has a heritage that stretches back to the 1970s and has built its success on a culture of continuous improvement, which makes retaining experienced staff a priority.

Abdulla Kalban, EGA’s Managing Director and Chief Executive Officer, said; “Each year, I am proud and humbled to celebrate this milestone with so many team members. EGA has become a leading company through a continued focus on how we can do our business better, and that takes knowledge and experience. That is why one of my priorities is to ensure everyone at EGA has the opportunity to realise their potential with us.”

Mr. Kalban joined EGA as a graduate trainee in 1985. Six other members of EGA’s 11-strong Executive Committee also originally joined as fresh graduates Khaled Buhumaid, Senior Vice President of Government Relations, is the most senior employee to reach 25 years of service in 2017.

Mr Buhumaid said “We have been on a remarkable journey together at EGA, building a major business and making a significant contribution to the industrialisation and economic diversification of the UAE. It is privilege to be part of this team.”

Retention at EGA is driven in part by the company’s active programme for training and development. As employees progress through their careers, EGA provides structured management training programmes to develop skills and behaviors that will enable them to seek higher roles in the company.

EGA is one of only two non-educational organisations in the Middle East that is accredited by the Institute of Leadership and Management, a part of City and Guilds which is the global benchmark accrediting body for vocational training. This means EGA can issue vocational qualifications that are globally recognised.

EGA typically has over 100 graduate trainees on 18-month programmes before assignment to permanent roles within the business. EGA also sponsors young UAE Nationals through education, and today sponsors over 150 in their university studies