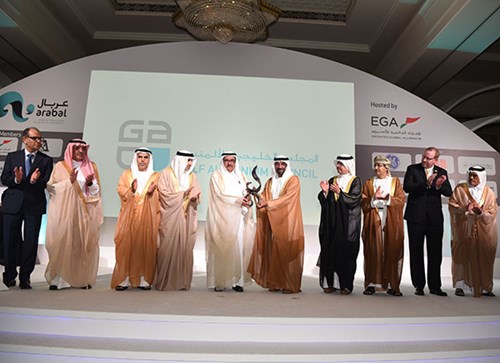 United Arab Emirates, 22 November 2016: EGA strengthens the UAE’s position by positing it as the fourth largest producer of aluminium on the global map, with production over 2.4 million tonnes of hot, molten primary aluminium per year. This position is particularly remarkable, given that EGA commenced operations just 37 years ago, in October 1979, with a production capacity of 135,000 tonnes per year. EGA currently employs around 7,000 people in the UAE, with an Emiratisation rate in targeted positions of 35% for 2016. The company is targeting 42% per cent Emiratisation in these positions by 2020.

The growth of the business over the years (some 700%) is accredited to the vision and leadership of HH Sheikh Hamdan bin Rashid Al Maktoum (Deputy Ruler of Dubai and UAE Minister of Finance), who is also accredited with developing the economy and an industrial base in the UAE.

HH Sheikh Hamdan was Chairman of Dubai Aluminium (“DUBAL”), the UAE’s first primary aluminium producer, from DUBAL’s inception in the 1970s until the formation of EGA mid-2013 and the coincident integration of DUBAL and Emirates Aluminium (“EMAL”) into the new entity.

Under HH Sheikh Hamdan’s guidance, DUBAL underwent a series of expansion projects that resulted in the growth of the broader aluminium industry in the region. Today, DUBAL produces more than 1 million tonnes of hot, molten primary aluminium per year. DUBAL also acquired a 50% share in and built EMAL in Abu Dhabi. EMAL is currently the world’s largest primary aluminium smelter, producing almost 1.4 million tonnes per year.

HH Sheikh Hamdan also led investment in Guinea Alumina Corporation (“GAC”, now an EGA asset) and other projects. And HH Sheikh Hamdan encouraged DUBAL’s in-house development of advanced reduction technologies that not only rank best-in-class but have also been sold abroad – a first for the UAE.