EGA to supply high-quality aluminium directly to BMW for engines 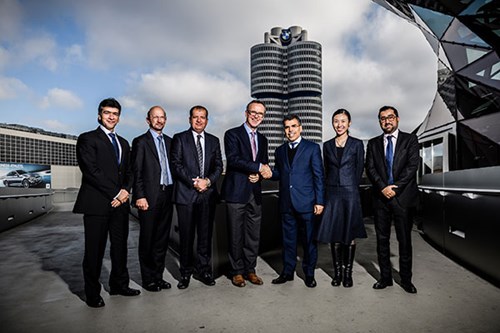 German car manufacturer to use Emirati aluminium to make some of its high performance engines in first deal for UAE company with a major automotive group.

United Arab Emirates, 15 November 2016: Emirates Global Aluminium, the largest industrial company in the UAE outside the oil and gas industry, is to supply high quality UAE-made aluminium to BMW for use in the manufacture of some of the German car group’s engines.

Although EGA has supplied aluminium to the automotive parts industry for decades, the deal with BMW is the first made directly with a major automotive group.

EGA will supply BMW with aluminium under the deal for the next three years.

Abdulla Kalban, Managing Director and Chief Executive Officer of EGA, visited BMW’s head office in Munich, Germany, after the finalisation of the contract.

Mr Kalban said: “Winning BMW as a direct customer is important for EGA because their standards are so high, both for the aluminium itself and how it is made. EGA produces high quality aluminium with world-class efficiency and environmental responsibility. We have spent decades developing technology in the UAE to improve our processes and make this possible.”

EGA is one of the oldest companies in the UAE outside the oil and gas industry. The development of EGA has taken the UAE from no aluminium production to the fourth largest aluminium producing nation in the world.

EGA operates two smelters in the UAE, one in Jebel Ali in Dubai and the other in Al Taweelah in Abu Dhabi. The company is also building a bauxite mine in the Republic of Guinea and an alumina refinery at Al Taweelah. Bauxite is refined into alumina which is the main feedstock for aluminium smelters.

EGA has focused on innovation for 25 years and has used its own technology for all expansions since the construction of the original Jebel Ali smelter in the 1970s. EGA’s current technology is more than twice as efficient as that developed by the company in the 1990s. This UAE-developed technology has recently been licensed by EGA internationally, to Alba in Bahrain.