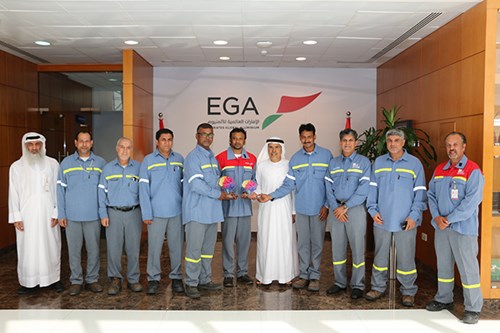 United Arab Emirates, 08 May 2016: Testifying to its continuous efforts to push the boundaries of innovation, a submission from Emirates Global Aluminium (“EGA”) won the Productivity Awardin the 2016 Ideas.Arabia Idea of the Year Competition, held coincident with the Ideas.Arabia 11th International Conference in Dubai at the end of April. The aim of the annual contest is to honour employees and organisations by recognising the most significant ideas implemented in the preceding period. It also provides an opportunity for participating companies to benchmark against other leading organisations, and motivate employees.

A key driver in the formation of Ideas. Arabia as a subgroup of the Dubai Quality Group (“DQG”), EGA has supported the conference and associated competitions for eleven consecutive years since the inaugural Ideas.Arabia in 2006. With this win, EGA has to date secured a total of 26 wins across various categories in the Ideas.Arabia Idea of the Year competition.

“Continuous improvement and innovation is integral to the DNA at EGA. In today’s highly competitive world, the creativity and innovation of all employees is an operating necessity for the success of the organisation,” says Salman Abdulla (Executive Vice President – Health, Safety, Sustainability, Environment & Quality). “What makes EGA different from our competitors is our award-winning employee involvement programme, where employees have a stake in EGA’s growth and sustainability by offering improvement ideas and problem-solving solutions.”

“EGA’s values promote a performance-based work culture where individuals are empowered through ownership, accountability, and team support, allowing EGA to excel in operations through continuous improvement and innovation,” adds Abdulla. “Our continuous foundational support for DQG and Ideas.Arabia is further testament to this.”