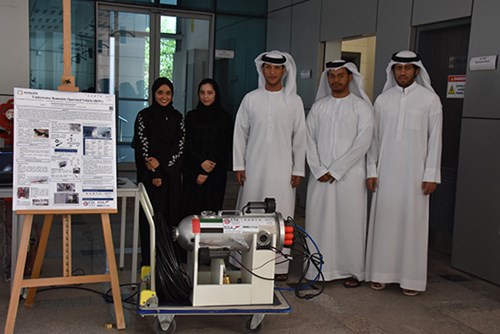 United Arab Emirates, 15 May 2016: As part of its commitment to invest in the UAE’s socio-economic growth, Emirates Global Aluminium (“EGA”) – one of the world’s largest primary aluminium producers – has provided tangible support for the Senior Design (Graduation) Project submitted by mechanical engineering students at Khalifa University of Science, Technology and Research (“KU”) in Abu Dhabi. The aluminium giant donated more than 285 kg of primary aluminium billets to a team of mechanical engineering students, for the design and prototype production of an underwater Remotely Operated Vehicle (“ROV”) capable of operating to a depth of 100 m.

The team of students – comprising Abdelaziz Al Zaabi (team leader), Abdulla Baswaid, Mohammad Al Mulla, Nouf Al Ammari and Aamna Al Jarwan – used a CNC Lathe and milling machine at the university to make the ROV from the EGA metal, and then demonstrated their model at KU’s Innovation Day on 15 May 2016. A celebration of the inventive work produced by KU students, with a specific focus on senior design projects, KU’s Innovation Day highlights the progression, talent and expertise of the university’s students and recognises students who have produced extraordinary work during their university tenure.

Commenting on the sponsorship, Khalid Essa Buhumaid (Senior Vice President, Government Relations) says, “Developing the skills of the UAE’s youth is a high priority for our business, particularly in technical fields such as engineering. By investing EGA’s time and financial resources into supporting platforms that encourage innovation and creativity, EGA is able to make a lasting contribution to the UAE’s economy.”

“Having access to the highest quality aluminium from EGA meant that we were able to design our project according to the best industry standards in terms of material usage,” explains Al Zaabi. “Our research has shown that water corrosion resistant aluminium has advantages when used underwater, especially as it can also handle high pressure.”

Buhumaid adds that EGA places specific emphasis on the development and education of UAE’s youth in order to support the broader goals of the UAE government. Further evidence of this lies in EGA’s sponsorship of two innovation camps (“I-Camps”) earlier this year, in partnership with INJAZ UAE. The I-Camps endeavour to expand the horizons of UAE National students by introducing concepts such as entrepreneurship.