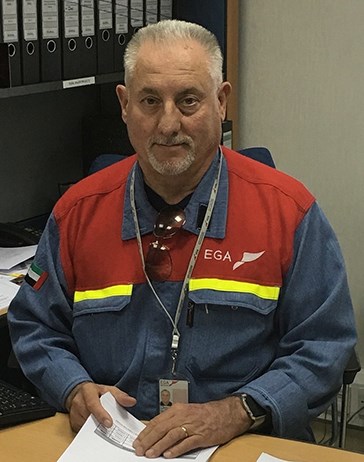 United Arab Emirates, 02 March 2016: Over the past 28 years or so, Emirates Global Aluminium (“EGA”) has made substantial investments in developing technologies that ensure continuous improvements in its operations. Indeed, using the best available technologies is integral to EGA’s drive to ensure long-term competitiveness in an industry that is sensitive to product quality, costs and environmental performance.

Excelling in its operations through continuous improvement and innovation, EGA has been working with UAE innovation support programme “Takamul” since 2014 to patent a number of proprietary technologies. Following evaluation by Takamul’s Patent Review Committee, approval for financial support was granted to EGA in December 2015 for the development of a unique “non-contact zone” that will be used in the aluminium production process.

Aluminium production takes place in an electrolytic cell, a large carbon-lined block inside a steel container which forms a negative electrode or ‘cathode’. In an aluminium smelter, these electrolytic cells are connected in series, a formation that is referred to as a potline. Typically, cathode blocks are made from graphite, which helps to push the amperage through the cells, increasing the total production of the potline.

In standard pot designs, the current within the cell can be uneven, with the highest density of current found near the extremities of the cathode block. The main disadvantage of this is that the high current increases the wearing rate of the graphite lining of the block extremity (giving a wearing rate up to 45mm to 60 mm per year), reducing the lifespan of the pot.

Replacing pots can be a costly exercise; therefore aluminium producers need to maintain the life of the pots in their pot lines for as long as possible. Bernard Jonqua (Manager R&D Technology Potlining, EGA Jebel Ali operations) explains, “The average cost of stopping and rebuilding just one pot is US$ 200,000. To put this into context, in an aluminium plant with 1,000 pots, extending the life of the pots by one extra year could deliver an annual gain in excess of US$ 5 million for an aluminium producer.”

To reduce the voltage drop in a cathode – and therefore increase the stability of the pot – copper inserts (in the form of rods) are either placed inside a hole in the centre of the steel collector bar; or placed inside a groove made on top of steel collector bars – these bars constituting the area where the electric current is carried from one cell to the next. Although the stability of the cell is improved by using these copper inserts, the density of current near the extremities of the cathode still remains high as the current will always seek the shortest route to reach the next pot.

In September 2010, the R&D team at EGA Jebel Ali (also known as Dubai Aluminium or “DUBAL”) embarked on a quest to a find a unique arrangement for the copper inserts. The main aim of the project – which was led by Abdalla Al Zarouni (Director of Technology Development and Transfer, EGA Jebel Ali operations) and Bernard Jonqua – was to reduce the density of the current near to the edges of the cell, thereby decreasing the wearing rate of the lining and increasing the life expectancy of the cell by at least 10 months (securing an additional pot life of 15 per cent). The invention evolved from their research was a new ‘non-contact’ zone solution.

In addition to the unique arrangement for the non-contact zone, EGA identified that a length of 150 mm for the zone delivered optimum results. Initial tests have proved that pairing EGA’s non-contact zone invention with copper inserts successfully decreases the energy consumption of the cell. The solution is expected to deliver significant cost-savings in pot replacement, contributing to a more efficient potline process.