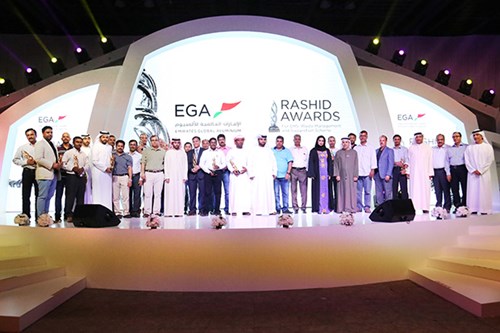 United Arab Emirates, 23 March 2016: For 35 years, EGA has actively encouraged employee involvement and engagement in its quest to achieve performance excellence. Integral to this approach is regular recognition and rewarding of employees for their contributions to continuous improvement through submitting innovative ideas with measurable impact to the EGA Suggestion Scheme; and celebrating top performers in key disciplines – such as Environment, Health, Safety & Waste Management (“EHS & WM”).

In keeping with this tradition, EGA hosts Rashid Awards for EHS & WM and EGA Suggestion Scheme each year, using the forum to recognise the top achievers in both areas in the prior year. All EGA employees and executive management are invited to attend the awards ceremony to acknowledge and celebrate the winners. More than 1,000 people attended the 2016 Rashid Awards, which took place in Dubai on 21 March.

Commenting on the occasion, Abdulla Kalban (MD & CEO at EGA) said, "The Rashid Awards recognise and appreciate those outstanding achievers – both individuals and teams – who have contributed measurable added value to our business in the past year. We attach great importance to these awards, which are an expression of EGA’s appreciation for the winners’ dedication towards fulfilling our vision of building a legacy of excellence for the UAE."

This year, fourteen Rashid Awards for EHS & WM were presented in six categories:

“At EGA, continuous improvement through innovation is a fundamental constituent of our corporate DNA, along with teamwork and a quest for excellence in all we do,” says Kalban. “Our people thrive in a culture where their expertise, knowledge and experience is valued and where they are empowered to make a difference. Acknowledging their contributions is not only the right thing to do, but also inspires them to greater heights – to our mutual benefit.”