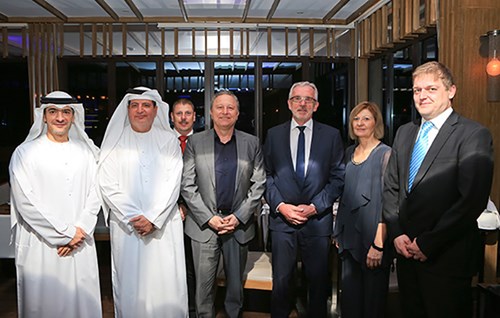 The successful business partnership between Emirates Global Aluminium (“EGA”) and the Austrian company Hertwich Engineering (“HE”) celebrates its 25th anniversary in 2016. The close and confident cooperation between the two businesses has provided the basis for the trust nowadays placed by downstream plants all over the world in the outstanding quality standard of the aluminium produced by EGA.

United Arab Emirates, 14 March 2016: Since starting production in 1979 Dubai Aluminium (“DUBAL”, now an operating subsidiary of Emirates Global Aluminium (“EGA”) and referred to as EGA Jebel Ali) has become one of the world’s largest producers of primary aluminium, with a capacity in excess of 1 million tonnes per annum. Together with Emirates Aluminium (“EMAL”, another EGA subsidiary referred to as EGA Al Taweelah), EGA today has a production capacity of around 2.4 million tonnes per annum, ranking the business among the five largest primary aluminium producers in the world.

The largest proportion of EGA’s production, amounting to 45 per cent of the total in 2015, is billets for extrusion and forging, which are then further processed by downstream industry. Widely acknowledged as the leading producer of billets for extrusion and forging, EGA’s metal meets the strictest quality demands – as attested by sections extruded from EGA billets being used in several iconic buildings around the world.

Achieving such a high quality standard requires a series of selective measures for preparing the hot molten aluminium and cast billets for the subsequent extrusion and forging processes. The equipment and technologies required for this are the field of HE. In the business sector of melting, heat treatment and recycling technology of aluminium, HE is today the technology and market leader. This success in the special sector of extrusion and forging pre-material production is largely attributable to the company’s collaboration with EGA Jebel Ali.

In its search for new and better systems HE has developed innovative and sometimes revolutionary technologies. However, for these to become established on the world market, reference plants were needed where the technologies’ capabilities could be demonstrated on an industrial scale. HE found such a partner in EGA Jebel Ali. For starters, EGA Jebel Ali which was the first smelter complex in the Middle East to use the completely new HE continuous furnaces for heat treatment (known as homogenisation), together with a 100 per cent ultrasonic inspection system and two sawing machines. The HE heat treatment technology yields exceptional material quality, without any internal defects and with outstanding uniformity of the properties over the full length of the extruded sections. Based on this proven success, the HE process is today used for around 60 per cent of all billets for extrusion and forging produced worldwide. At present EGA’s subsidiaries operate a total of six homogenizing lines of this type.

However, continuous homogenizing technology is not appropriate for every purpose in producing billets for extrusion and forging; and the conventional (batch) method remains indispensable. To achieve the same standards with conventional technology, HE has also developed a new furnace concept. Here again, the cooperation partner was EGA Jebel Ali, which was the first smelter complex to install and use the new technology. Its performance capabilities have since been fully demonstrated.

Looking back over the 25 years of collaboration between the two businesses, it is evident that the confident partnership has contributed to both rising to the top of their fields –EGA for its superior quality extrusion billet and HE for the equipment required to process the same. Driven by a mutual quest for continuous improvement, the two partners will rest on the laurels of their achievements to date, but instead continue to work together for even greater success.