EGA protects the environment, for the future 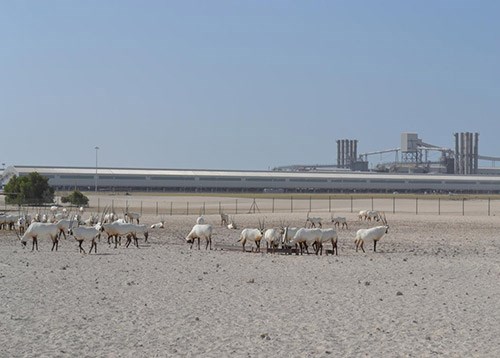 United Arab Emirates, 14 June 2016: Committed to protecting the environment wherever it operates, Emirates Global Aluminium (“EGA”) – one of the world’s five top aluminium producers and a leading global player in the aluminium industry – pro-actively safeguards the biodiversity in areas surrounding its operations. This is evidenced through ongoing initiatives that conserve wildlife, such as the dedicated turtle and gazelle protection programmes implemented at EGA’s core midstream smelter operations in the UAE.

These efforts are fully aligned with World Environment Day (“WED”), celebrated on 5 June 2016, under the theme “Go Wild for Life”. The theme, chosen by the United Nations Environment Programme (“UNEP”), aimed to encourage everyone to celebrate all species under threat and take personal action to help safeguard them for future generations.

“As a responsible organisation, EGA upholds the principles of sustainability and strives continually to contain the impact of our operations on the environment,” explains Salman Abdulla (Senior Vice President: Health, Safety, Sustainability, Environment & Quality). “We install best available technologies to limit our emissions; proactively manage resource consumption levels – from raw materials through energy to water; and work tirelessly to protect the nation’s natural wealth of fauna and flora. We do these things, and more, to ensure that future generations can still enjoy a healthy planet.”

Sea turtle populations around the globe are threatened with extinction, having been heavily over-harvested and had their habitat increasingly destroyed by mankind. Increased coastal development, urbanisation and industrialization have caused a decline in the global population of marine turtles. With the coastline of the Arabian Peninsula being a significant turtle breeding area, especially for threatened species such as the Greenback and Hawksbill turtle, protecting these marine creatures is high on the UAE agenda.

It is also high on the agenda at EGA’s Jebel Ali and Al Taweelah Operations, where formal Turtle Protection Programmes are in place. At Jebel Ali, a set of procedures and guidelines is in place on how to handle sea turtles that become trapped in settling chambers including maintaining a database of the various species trapped. Injured turtles are sent to the Sea Turtles Rehabilitation Unit in Burj Al Arab for treatment and healthy individuals are released back into the sea.

At Al Taweelah, the site’s Emergency Response Team (“ERT”) has set up a programme to protect the turtles that come on to the beach to lay eggs. For example, having noticed that light pollution from the site was causing the hatchlings to head towards the plant instead of the sea, the ERT installed horseshoe-shaped catchment nets that open in the direction of the sea. Daily inspections are conducted for evidence of any visits to the beach area, and an annual beach map is maintained to record tracks of all turtle visits as well as the location of each nest. In addition, the ERT engages in annual beach maintenance and preparations for each of the nesting seasons, including a major beach clean-up campaign each year. Thanks to these efforts, several hundred turtles have successfully hatched on the Al Taweelah beach during the last five years.

The Al Taweelah ERT has also established a close working relationship with the Dubai Turtle Sanctuary, which operates within Madinat Jumeriah, in terms of rehabilitation of rescued turtles and for expert advice.

Immediately adjacent to the Al Taweelah site is a Sheikh’s Palace, the grounds of which include a large gazelle conservation area. Acknowledging that fluoride emissions from the smelter may harm the gazelles (given that fluoride may cause fluorosis of teeth and bones), the site monitors the fluoride level by carrying out regular vegetation analysis in the gazelles’ habitat; commissions visual inspection of vegetation by a third party consultant; and works collaboratively with the farmers for ongoing monitoring of the gazelles to detect early signs fluorosis.

“Monitoring the gazelles and the vegetation are key factors in determining the fluoride content in the environment as well as mitigating the potential impact,” says Abdulla. “Regular discussions are therefore held with the palace in-charge about general observations regarding gazelle health and any abnormal development.”

As importantly, stringent emission controls within both of EGA’s smelter operations ensure that fluoride emissions are kept as low as possible. The health of the vegetation around the premises testifies to this. Indeed, an expert vegetation consultant reported that “Overall, the generally excellent health of the plants is a credit (to EGA). It is the result of very low emission rates, low rates of fugitive emissions and … pro-active management of the plants. It is quite a remarkable achievement in such an extreme environment and much better than I have seen at other smelters.”

Further evidence of EGA’s efforts to protect the biodiversity in the surrounding environment is the Terrestrial Fauna Translocation initiative implemented prior to the development of Al Taweelah Operations (then referred to as “EMAL”). This involved the capture, translocation and release of terrestrial fauna from the EMAL Project area (primarily near the Al Taweelah Power & Desalination plants) to appropriate habitat locations within the emirate of Abu Dhabi before construction commenced on the project site.

The EMAL Environment Impact Analysis study identified several species to be translocated, namely Ethiopian Hedgehog, Cape Hare, Spiny-tailed lizard, and four species of Geckos. The translocation methodology included pre-capturing preparations, such as track and dropping observation and recording, animal capture and trapping; and then transporting the animals to suitable sites approved by the Environment Agency – Abu Dhabi (“EAD”). The animals were also fitted with tracking devices to track and observe their whereabouts, as well as for future identification.

In line with the UAE’s Vision 2021 to build a “Green Economy for Sustainable Development”, EGA remains committed to protecting the environment and biodiversity by continuously assessing the impact from its operations, undertaking best practices for sustainable development, and improving environment awareness among employees and stakeholders. “We measure our horizons in decades and generations,” says Abdulla. “We act as guardians of the environment and go the extra mile, considering the investment as fundamental to creating a better future for everyone.”