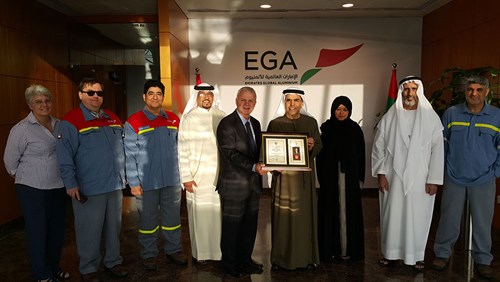 United Arab Emirates, 16 February 2016: Environmental protection is at the forefront of all activities at Emirates Global Aluminium (“EGA”). This commitment is demonstrated through the company’s long-term goals and values, which include a determination to “protect the environment wherever we operate.” As testament to this, the environmental initiatives implemented by EGA have earned the company recognition on a local and global level, with the most recent example being The Emirates Appreciation Award for the Environment 2016, where EGA Jebel Ali Operations won in the large industry category.

The award win acknowledges EGA management’s belief in a sustainable business development philosophy, as explained by Abdulla Kalban (MD & CEO: EGA), “EGA operates a deep commitment to sustainability. We measure our horizons in decades and generations, we act as guardians of the environment, and we go the extra mile. We consider this an investment in helping us achieve our aspiration for a better future.”

Providing context to EGA Jebel Ali’s latest accolade Kalban added, “From an environmental perspective, minimising harmful emissions and the adoption of world-class practices are central to all EGA’s activities. The combination has led to significant reductions in the company’s impact on the environment, many of which have set industry benchmarks.”

EGA Jebel Ali benchmarks its Environment, Health and Safety (“EHS”) performance against the best companies internationally and has achieved and/or improved environment performances across all parameters. Notable environmental initiatives and achievements from EGA’s Dubai-based smelter include:

The Emirates Appreciation Award for the Environment is a biennial award programme organised by the Zayed International Foundation for the Environment to recognise and promote the values of sustainable living and environmentally conscious initiatives in the UAE community. The award programme is held under the patronage of HH Sheikh Mohammed bin Rashid Al Maktoum (Vice President and Prime Minister of the UAE and Ruler of Dubai).