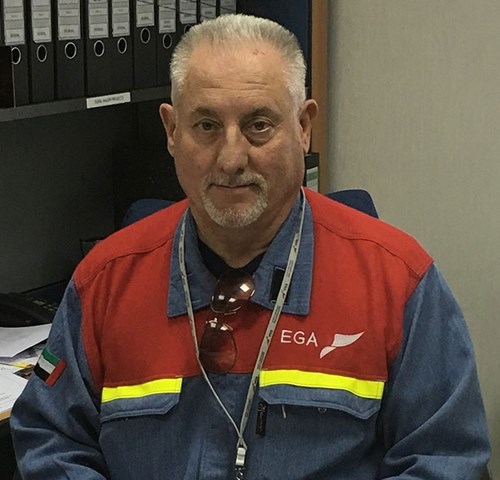 EGA Jebel Ali (also known as “Dubai Aluminium” or “DUBAL”) has been involved in technology development for more than 20 years, and EGA’s Technology Development and Transfer department has been mandated to innovate continuously. These efforts have resulted in inventions and new ideas that have helped improve EGA’s environmental performance (through lower energy usage and lower emissions) and operational efficiency, while garnering the company significant respect in the global aluminium sector.

Since 2014, EGA has been working with Takamul to patent the company’s proprietary technologies. Founded by the Abu Dhabi Technology Development Committee (“TDC”), Takamul supports inventors at various stages of the innovation lifecycle and promotes innovation across the Emirates. Following evaluation by Takamul’s Patent Review Committee, approval from for financial support was granted to EGA in October 2015 for the development of a copper bar invention that will be used in the aluminium production process.

Aluminium production takes place in an electrolytic cell, a large carbon-lined block inside a steel container which forms a negative electrode or ‘cathode’. One of the main factors that affects the energy consumption of the electrolytic cell is the total resistance of the cell, and an important section of the cell that affects overall resistance, are cathode collector bars. Conventionally, the cathode collector bars in the potlines at EGA are made from steel, a material that has a high resistivity especially at high temperatures and slows down the electric current. This means that a higher voltage is required to power the pot, using more energy as a result.

The energy cost of producing aluminium is considerable. Typically, 13 kWh to 15 kWh is needed to produce one kilogram of aluminium. Together, EGA’s Power Plants at Jebel Ali and Al Taweelah (also known as Emirates Aluminium or “EMAL”) generate 5,450 MW, which is enough to light up 545 million light bulbs for an hour and equates to approximately 20 per cent of the 27 GW of installed capacity in the UAE.

In October 2012, the R&D team at DUBAL led by Abdalla Al Zarouni (Director of Dubai Technology Transfer, EGA Jebel Ali operations) and Bernard Jonqua (Manager R&D Technology Potlining, DUBAL Technology, EGA Jebel Ali operations) set out to identify a material to replace steel for the collector bars. The new material needed to have a significantly lower electrical resistivity to reduce the voltage of the cathode - and consequently the total voltage of the pot. In turn, this would significantly reduce energy consumption of the electrolytic cells, lowering the carbon footprint and energy related costs of aluminium production.

“The solution that we identified for the collector bars was to replace steel with copper. Copper is six times less resistive than steel and allows electric current to flow more effectively, resulting in a more even distribution of the current in the cathode,” said Jonqua. He continued, “Once we identified the appropriate material, our next step was to establish the most effective position for the copper bar inside the cathode. The first idea was to drill a cylindrical hole at the bottom of the cathode block but with this method, the hole did not provide the required tolerances. We then worked on several variations, eventually discovering that creating a small groove in the bottom of the cathode block was the best solution. With this design, the copper bars can be inserted, adjusted at the requested value and will stay inside the grooves even when the cathode block is turned over.”

The materials for the full copper bar are now on order and a test - which will take several months - will be conducted in 2016. During the test, three cathodes will be replaced with full copper bars in one pot. The pot will then be stopped after approximately four months where the condition of the copper will be assessed along with the performance and reliability of the invention.

The cell design is unique and has never been tested in this way before. Along with improving energy efficiency, which has a significant impact on cost, at the end of the pot life the copper collector bars can be recovered and sold back to a copper factory for 70- to 85 per cent of the LME price of copper. This brings further commercial benefits to EGA and offers a more sustainable solution overall.