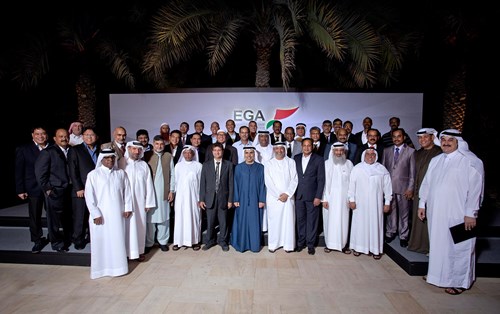 United Arab Emirates, 15 November 2015: Demonstrating the strong culture of commitment and dedication at Emirates Global Aluminium (“EGA”), a group of 46 employees celebrated 25 years of service at the company this year. To mark the milestone, the long-serving employees were honoured at EGA’s annual 25 Year Awards, which took place on 11 November 2015 at Magnolia Restaurant, Al Qasr Hotel, Madinat Jumeirah, Dubai. Hosted by Abdulla Kalban (MD & CEO: EGA), the gala dinner was also attended by members of EGA’s executive management, along with many of the recipients’ spouses.

The 25 Year Awards were launched in 2004, coincident with the 25th anniversary of the commissioning in 1979 of EGA operating subsidiary Dubai Aluminium (“DUBAL”). This year’s ceremony is the twelfth of its kind. In total, 570 employees have completed 25 years’ service at EGA over the years.

The group of award recipients honoured in 2015 joined the business in 1990. That year, EGA produced 174,280 tonnes of hot metal. Today, EGA has a hot metal production capacity in excess of 2.4 million tonnes per year – some 14 times greater than a quarter century ago. Saleh Ahmed Janeeh (Director: Operational Excellence at EGA) spoke on behalf of the 25-year employees at the event, while Abdulla Kalban – who himself celebrated 30 years of service at EGA this year – applauded their contributions to the company in his keynote speech.

“EGA has been built on a legacy of excellence, and tonight’s award recipients have played an important part in this legacy. Our people are without doubt our most valuable asset and EGA could not have attained the success it has without the efforts of the employees we are recognising this evening,” said Kalban. “On behalf of the EGA Board of Directors, the executive management team and your colleagues, I offer you the heartiest congratulations on reaching this remarkable milestone in your career.”

Ensuring rewarding career and development opportunities for all employees, EGA promotes a performance-based work culture where individuals are empowered through ownership, accountability and team support. With a growing reputation as one of the UAE’s leading employers, EGA places a strong emphasis on the contribution, qualities and skills of its employees. The number of long-standing employees in the business testifies to this as well as to the valued placed by employees on the investment made by EGA in their personal and professional growth.