EGA sponsorship of Omega Dubai Ladies Masters: 10 out of 10 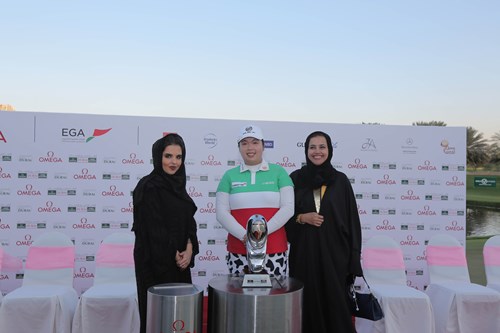 United Arab Emirates, 13 December 2015: Continuing its support of community initiatives and sporting events in the UAE, Emirates Global Aluminium (“EGA”) was the sponsor partner of the 10th Omega Dubai Ladies Masters 2015 golf tournament which took place from 9 to 12 December at Emirates Golf Club. One of the founding sponsors of the season-ending Ladies European Tour event, this is the 10th consecutive year that EGA has sponsored the annual tournament.

Attracting the world’s leading players, the Omega Dubai Ladies Masters is held under the patronage of HRH Princess Haya Bint Al Hussein, wife of HH Sheikh Mohammed Bin Rashid Al Maktoum (Vice President and Prime Minister of the UAE and Ruler of Dubai). Thanks to EGA’s support, the tournament has grown in stature over the years – in turn contributing to Dubai’s growing international renown as a host of world-class sporting events.

“As a responsible corporate citizen, EGA’s sponsorship of the Omega Dubai Ladies Masters is part of our sustained commitment to the long-term social and economic development of the UAE and Dubai,” said Khalid Essa Buhumaid (Senior Vice President: Communication & Government Relations). “Sponsoring the event also gives us the opportunity to host our valued partners in the UAE, who we invite each year to enjoy the sporting action in our hospitality chalet. This is just one of the ways in which we express our gratitude for their on-going support of EGA.”

EGA is also the sponsor partner of the annual Omega Dubai Desert Classic Tournament, the next staging of which takes place at the Emirates Golf Club from 4 to 7 February 2016. The 2016 tournament will mark the 25th consecutive year that EGA has been involved with the event, having been a major sponsor since 1992.