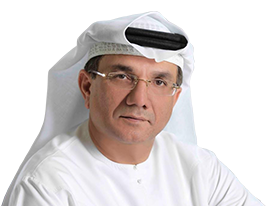 Yousuf Bastaki has been in charge of Upstream Operations at EGA since 2016 and is also responsible for Capital Projects.

Mr. Bastaki joined DUBAL in 1985 as a graduate trainee and has since acquired more than 30 years of technical, managerial and leadership experience in the aluminium industry.

Over the years, he has been progressively promoted to senior positions including General Manager Engineering Expansion & Technology  Development at DUBAL, Project Director at EMAL for Phase I & Phase II, and Vice President, Projects at EMAL.

Following the formation of EGA, Mr. Bastaki became Senior Vice President, Capital Projects before being promoted to his current role.

Mr. Bastaki holds an Executive MBA from the American University of Sharjah and a Bachelor’s degree in Electrical Engineering from the University of Colarado, Denver, USA. He has also held several memberships throughout his professional career including Chartered Engineer (UK), Fellow of the International Institute of Engineering and Technology, Project Management Professional from PMI International (USA) and Professional Engineer (EIT).