The sky is no limit

Whenever Wafa Al Kaz looks up above, out to sea or across the road, she sees the same thing. Aluminium. And lots of it.

“Not only is aluminium used on land such as in the automotive industry, but we are also producing aluminium for use at sea, and aluminium for aerospace parts,” says Wafa, a metallurgist at Emirates Global Aluminium.

“Aluminium makes modern life possible for people everywhere – on land, at sea and in the skies. That's why it's an interesting field.”

Wafa’s job is to ensure EGA’s customers receive exactly the metal they need, with the right chemical and mechanical properties for the application in which it will be used, which can be anything from a car sunroof to inside a chip in a smartphone. The Metallurgy department’s work includes metal cleanliness evaluations, conducting destructive and non-destructive tests, and technical support for customers to increase the productivity of their aluminium processing machinery and to deepen our partnerships with them. 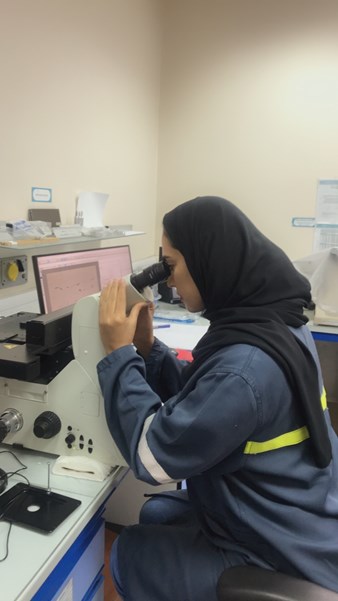 “I hold the customer’s trust in EGA in my hand,” Wafa says. “And ultimately the trust of the end-user of the product that is made with our metal.”

Of particular interest to Wafa right now is the use of aluminium in the automotive industry. Aluminium use in vehicles – and increasingly electric vehicles – is expected to accelerate over the next few years as the green economic recovery shift picks up pace. Lighter than steel yet strong, aluminium has become the metal of choice in a range of parts including the chassis, structural components such as the shock tower and internal panels, and the batteries that power electric vehicles.

“There is now a high demand from automotive industries to change their parts from steel to aluminium,” said Wafa. “And that's for many different reasons. In aluminium, the corrosion rate is slower compared to steel. It's also more durable. It can be easily formed into different shapes.

“The properties can actually be changed quickly by the small addition of other elements such as magnesium, iron, manganese and more. Now there is a high demand for high strength and long-life alloys.”

The use of aluminium in the industry, Wafa says, means safer and lighter vehicles on the roads, reducing fuel consumption and emissions.

“You need a durable part in your car,” she said. “So, developing a new alloy with a new chemical composition can actually allow you to use your car for a longer time. Also, it can maintain the strength of the part in case of accidents – which helps all motorists, including families.

“The great thing about aluminium is that it is infinitely-recyclable. So when the car’s useful life is over, the aluminium can be turned into something else people need.

“All eyes now are on safety and environmental sustainability – and that’s because we have to protect the environment for ourselves and the next generation.”

Inspiring the next generation

Inspiring the next generation is something that Wafa has already achieved. It is something she not only relishes but also sees as a responsibility – especially for other women. Wafa readily admits that her industry is traditionally male-dominated but believes the work that she and other females have done proves that women can do what men do – “there’s no difference”, she says.

Wafa is the first Emirati woman to reach the position of General Superintendent in EGA’s Metallurgy department.

“If you put us in the weighing scale in terms of ability, the scale will be balanced,” Wafa adds.

“We have a lot of women in EGA. Women can work in any field, including in the aluminium industry. It's not an easy role, but women long before me have proven themselves and that’s made me accountable and responsible for what I'm doing.

“And this is the challenge for every single woman and the UAE – that we can do the impossible. Sometimes we build boundaries for ourselves but once we are exposed to challenges, we know that we can do better and that there is no limit.

“This is the vision of not only EGA but the Rulers of the UAE. We can now see women working everywhere. I'm very proud to be an Emirati woman in the aluminium industry. I am proud of what EGA is doing – we are leading the market, we are the biggest supplier ’premium aluminium’ in the world – and we are greatly contributing to the UAE’s economy.

“Because of that, I'm taking full accountability to work from my heart and to give the best of myself – for EGA, and for my country.”

Following her heart is where it all began for Wafa. The decision to work in a STEM (science, technology, engineering and mathematics) field, and specifically in the aluminium industry, came from wanting to do something “unique”, Wafa says. “That’s what encouraged me to join EGA – and that's why I really like being in the Metallurgy department, because every day we are discovering new things. Whenever you take a sample from any product, you will see something different to what you saw yesterday.”

That sense of discovery has taken Wafa around the world in the pursuit of knowledge and growth. She attended a metallurgy course in Switzerland, a seminar on the automotive industry in China, and meets fellow experts from other smelters for best practice and knowledge sharing.  She visits EGA’s customer companies to see how they use the company’s metal first hand. She is also part of EGA’s Ambassador Programme, through which young STEM professionals at the company engage with students at UAE universities to discuss working in industry.

“EGA gives us the opportunity to develop ourselves professionally and technically,” she said. “By reaching out to the world, we stay ahead of the industry on what is coming next.”

She adds: “It also allows our customers to be more competitive in the aluminium applications they are fulfilling, wherever they are.”

For Wafa and EGA, the sky is indeed no limit.