Karl Josef Bayer is a familiar name to many people working in the aluminium industry. In 1887, the Austrian engineer developed a chemical process to extract alumina from bauxite. His method is still used today to produce almost all of the world’s alumina, the feedstock for aluminium smelters. Our modern world could not have developed without the discovery.

Unfortunately, there is a drawback to this process that the industry has yet to fully solve: how to turn bauxite residue, the by-product of the refining process, into a product that is economically viable in diverse markets.

In spite of over a century of effort looking for uses, resulting in over 1,200 patents and hundreds of technically successful trials, it is thought that less than four million tonnes of the 150 million tonnes of bauxite residue produced annually is used in a productive way. As a result, there are thought to be over four billion tonnes of residue in managed storage facilities around the world today—largely in Australia, China and Brazil.

Emirates Global Aluminium operates a dedicated bauxite residue-storage site according to current, world-class best practices, about 35 kilometres inland from the Abu Dhabi coast at the Khalifa Industrial Zone. The bauxite residue is washed and pressed into a dry cake (less than 30% water content) for permanent and managed storage.

However, EGA and the UAE government are not fully satisfied with this solution for the long term; in part because all heavy industries in the country aspire to operate at the highest environmental standards. Also, the UAE has a relatively small land mass, so it neither wants nor can afford to give away precious space for non-productive use.

For EGA’s part, the company is committed to supporting the UAE economy as it aspires to become a leader of global industry and a pioneer in developing the nation’s knowledge economy, which means continuous investment in R&D to improve every stage of operations.

The challenge for EGA’s bauxite-residue researchers: find an alternative to storage.

EGA has already succeeded in turning another difficult-to-use by-product—spent pot lining—into a valuable resource. Spent pot lining is the used inner linings of the reduction cells in which aluminium is smelted. Globally, the aluminium industry produces more than one million tonnes of it every year, most of which goes into indefinite storage.

However, at EGA, spent pot lining is supplied to the cement industry to replace some fuel and refractory materials. In recent years, EGA has supplied more spent pot lining to UAE cement plants than it has produced, reducing stockpiles from previous years.

Now, EGA is building on this success by researching similarly beneficial and viable applications for its bauxite residue. 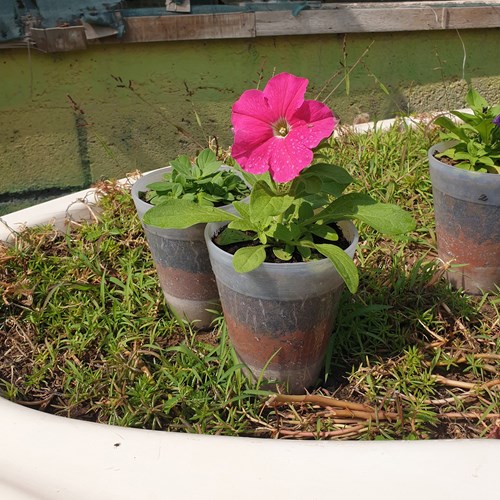 This is where EGA Research Engineer Abdulla Al Awar enters the picture. Abdulla graduated from UAE University in 2015 with a degree in chemical engineering and started at EGA less than a year later, having previously interned there in the Technology Development and Transfer department. In late 2018, he became the youngest member of the Bauxite Residue R&D team that has been mandated since 2016, to focus exclusively in discovering methods to turn waste into valuable products.

The work is challenging and that’s what makes it so exciting, Abdulla says:  “I come from a family of academics—several of them are PhD holders—so the standards are high, and I have a lot to live up to.”

“Actually,” he continues with a laugh, “when I was young, I rebelled and wanted to play football… and that didn’t work out. But I was good at maths and physics, so thought, ‘Why not become an engineer?’”

Since joining the team, Abdulla has been helping investigate ways to not only make bauxite residue harmless, but to turn it into something beneficial for both EGA and the UAE. “Research has been going on around the world for decades now,” he says of the work. “There have been successful experiments to turn small amounts into construction material. But what we are doing is very different. We are determined to find a solution that utilises the entire amount of bauxite residue we produce at EGA every day.”

To decide what products might be useful and beneficial on a large scale, the R&D team looked at the alternatives. Certain ideas, such as using the residue to construct bricks were discarded because of lack of local demand. Instead, the team decided to look at the natural resources the UAE currently lacks to inform ideas for products the country actually needs.

It turns out that, despite being a desert country, one of the things the UAE really needs is sand. Sand is used to build new roads and, unfortunately, although the UAE has an abundance of natural sand, most of it is too smooth and fine for use in construction. As a result, the UAE spends hundreds of millions of dollars every year to import sand from abroad.

If EGA could find a way to use bauxite residue as a replacement for sand in road construction, the researchers realised, then company could fill a critical need for the country while also significantly reducing import costs.

The challenge, however, is not just developing this solution, but doing so at a viable cost. EGA is, after all, insistent on creating a product that is both environmentally and economically beneficial to the nation.

But perhaps the most intriguing product EGA’s bauxite-residue researchers are working on involves a type of manufactured soil for use in landscaping. “After the Bayer refining process,” Abdulla explains, “some chemicals remain in the bauxite residue that make it unsuitable for plant growth. We’ve been figuring out how to remove these or change them into something beneficial by adding things like compost to make it suitable for plants. So far, we have found that our specially treated bauxite residue is much better than dune sand because it holds more water and has some useful elements that plants need.”

The idea is already beyond being a pipe dream. In a corner of the EGA corporate office reception area, two innocuous house plants are thriving in soil produced from treated bauxite residue. Three more of these bauxite-treated plants sit on the office windowsill of Abdulla’s boss, Abdalla Al Zarooni, EGA vice president of Technology, Development and Transfer.

Now the team needs to figure out how to do this on a much larger scale, at a cost that makes economic sense, and certain to be safe for everyone to use. It’s not a simple leap to go from potted plant to wholesale production but, if successful, the possibilities seem endless.

“Imagine if we were able to create a product that we can sell, meaning we wouldn’t need all those trucks to transport the residue; we don't need the land to store it,” says Abdulla. “We could be turning what is currently a big cost, and a long-term environmental challenge, into ongoing revenue, creating a circular economy that benefits everyone. That would be a great achievement for EGA, and we would be so proud to contribute to the country as a whole.”

Abdulla is touching on an important idea here. Most big problems require equally big answers. And no one is better placed to find solutions than large organisations with sizeable budgets and the brightest minds. But this work doesn’t take place in isolation.

Abdulla is part of a multidisciplinary team that partners with universities and research institutes in countries around the world—including Australia, the US, Europe and the UAE itself—to develop new ideas. Many of these ideas remain closely guarded secrets, given the huge commercial potential of a solution and the highly competitive nature of the industry.

“The alumina sector is a small industry in terms of big players,” Abdulla explains, “and I’m sure they’d all be interested to see what we’re doing. Ultimately, we are competing on a global scale and we want to be the best, so we have to be very careful with what we say in public.”

The bulk of Abdulla’s week is spent working in the lab, testing these ideas and validating previous findings. Promising ideas are then tested in the field, where he interacts with the onsite operations teams. Intense, incremental work of this nature requires a lot of discipline, patience and teamwork.

“There’s a saying that goes something like: ‘I didn't discover what works but I found 50,000 ways that don't work,’” Abdulla jokes. “But that’s research and these are all necessary steps. And for someone in their mid-20s, like myself, this is an exciting way to learn and increase my knowledge.”

Most of all, he says he is excited by the challenge of meeting the target, a task he thinks is achievable given the progress that has already been made at EGA. “We’ve uncovered a lot of new findings. We know things that we think no one else knows. We are aiming to be first in the world to find a solution.”

In the coming years, that hard work by the research team and its partners could turn into a solution that benefits not just EGA and the UAE but every major alumina plant, and their surrounding environment and communities, around the world. And that would be another incredible legacy for the UAE, to demonstrate that its leading industries are not just competing with the best—they are setting the standard.