Emirates Global Aluminium’s Al Taweelah alumina refinery is massive industrial facility. It took 11,542 people at peak and some 72 million hours of work to build, and required some 52,000 tonnes of steel—enough to construct seven Eiffel Towers.

But building the plant was not the only challenge. EGA also had to train over 600 people to run the new plant safely and efficiently, and they needed to be ready and experienced on day one of production. Even though Al Taweelah alumina refinery was the first in the UAE. So how could they do it?

These questions and more are what EGA Engineer Sumit Sontakke spends his days thinking about. 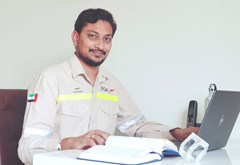 Sumit runs the Operator Training Simulator (OTS) of Al Taweelah alumina refinery’s digital twin — essentially a virtual replica of the plant — which he constantly feeds with information to map every detail of the refinery’s performance. This simulator was instrumental in helping Al Taweelah alumina refinery start production over a year ago and then ramp up in the safest, most effective way. It continues to guide operational upgrades today.

“Let me give you a comparison that you can relate to,” he says of the digital twin’s function. “Think of your house and how you know exactly where everything is, how it works, and you understand its foibles and glitches. Now imagine the scale and complexity of our alumina refinery at Al Taweelah. How would you even start to understand how this all works before it was still being built?”

Sumit, a chemical engineer from India with a postgraduate management degree, joined EGA in 2015 to accomplish this task. “When you are talking about an entire plant under construction, without this you would have little idea of how it will work in a real-world setting when it is finished. The digital twin gives you this understanding and helps you develop an operating strategy. We had it up and running well before the actual plant was finished; staff were being trained and we were ironing out issues before we even began production.”

In technical terms, the operator training simulator (OTS) as a digital twin incorporates the thermodynamic process models and one-to-one mirror imaging of the distributed control system (DCS). What this means in practice is that it helped to identify inevitable gaps in the design at Al Taweelah and avoid potential issues in the control logic during commissioning and start-up, which would have otherwise hampered or even delayed the ramp up.

Since then, the digital twin has continued to demonstrate its value as a test and training environment for multiple scenarios. It also serves as a mitigation tool for risks, since control room operators can train for various emergencies in a simulated setting. For comparison, think of airline pilots using a simulator to work through all the many emergency scenarios that will hopefully never come their way. By running a similar programme, the safety of the operators is much higher, and the risk of any fault leading to shutdown is greatly reduced.

“Imagine a plant spillage,” says Sumit. “Lives could be lost if the operator has never dealt with this situation before. But if he has trained for this on a simulator then he will know what to do. He can train beforehand to learn a range of responses.”

Not only that, the refinery operates on various parameters like temperature, pressure, flow and composition. To get the optimised efficiency one needs to operate the refinery, the digital twin is very helpful tool to testing the operation to its limits.

It can also iron out operational glitches by predicting how the machinery will react to an interruption. Once again, this makes the whole operational chain run more smoothly and safely. And, of course, quality is another priority for EGA. The digital twin helps the operator produce the right quality material.

But this is an ever-evolving task, seeing as there are so many variables to the way that complex machinery reacts to chemical processes, temperature fluctuations and a thousand other variables. It is Sumit’s job to constantly refine the digital twin so that it ever-more accurately resembles its real world counterpart. 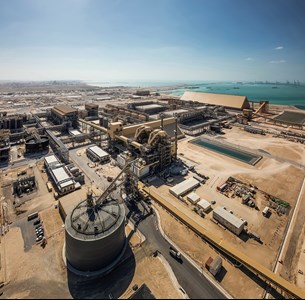 The merger of heavy physical infrastructure with digital sensors and models is part of the drive toward Industry 4.0. As the Internet of Things (IoT) makes more and more data from physical machinery available, engineers like Sumit can build models that more accurately resemble the real thing.

In time, Sumit think this will lead to technology being able to predict future scenarios to a far greater accuracy. In its present iteration, the digital twin doesn’t use artificial intelligence (AI), but Sumit is working on AI and machine learning (ML) applications for future phases.

He says these future scenarios are possible thanks to the faith that EGA places in its employees to research new ideas. “I’m fortunate to work for amazing management who focus on technology and are not afraid to invest. They have huge faith in their employees, which means I can play with technology and try innovative approaches. There are other players in the aluminium market who just focus on day-to-day activities and making a short-term profit above all else. But here at EGA the focus is longer term and on continual learning, and implementing technologies that benefit the employees, the industry and ultimately mankind. This is the power of innovation.”

We use cookies to collect and analyse information on our site's performance. Cookies also allow us and our partners to show you relevant ads when you visit our site and other 3rd party websites, including social networks. For further information please review our Cookie Policy