To fully appreciate how big a piece of machinery the stacker-reclaimer at Emirates Global Aluminium’s Guinea Alumina Corporation is, you have to stand well back.

The stacker-reclaimer is 125 metres long, that’s longer than a football pitch. It is 25 metres high, about the same height as a seven-storey building. It weighs a colossal 1,300 tonnes – more than double the weight of the heaviest aircraft ever built.

Running up and down a rail track, the purpose of the stacker-reclaimer is to pile up bauxite as it arrives at the port of Kamsar on Guinea’s coast. The machine also grabs bauxite from the stockpiles onto a conveyor on its way to the pier.

The stacker-reclaimer is a crucial part of operations at GAC. And at the helm of this phenomenal piece of machinery, you’ll find Houssainatou Kanté.

She relishes her role operating one of the largest pieces of mining equipment on the African continent – and that she is a woman doing a traditionally male-oriented task. It is a testament, Houssainatou says, to GAC’s commitment to gender equality.

“Women need to be empowered to take on roles traditionally considered to be for ‘men only’,” she says. “I love my job – the job satisfaction of operating such a powerful piece of equipment is hugely rewarding and I look forward to it every single day – and I love working for GAC. More generally speaking, I am also fully committed to the emancipation of women in Guinea in particular, and across the world.” 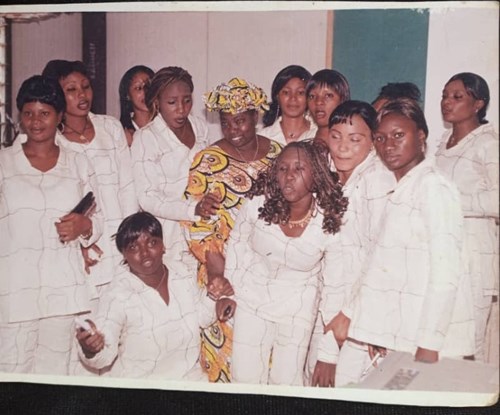 The mother of two grew up in the port city of Kamsar, which is in the Boké region, and is around four-and-a-half hours from the Guinean capital city of Conakry. Houssainatou was educated at the Boké Vocational Training Centre (Centre de Formation Professionnelle de Boké), where she was certified as a mining operator. She joined in the mining industry in 2007, working for Compagnie des Bauxites de Guinée.

A couple of years ago, she learned that GAC was looking to hire an in-house stacker-reclaimer operator and applied for the position. 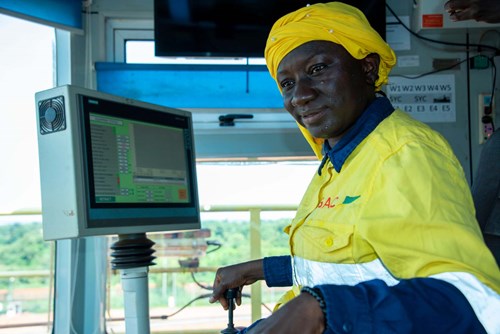 Asked her advice for other women who aspire to follow in her footsteps and pursue a career in the Guinean mining industry, Houssainatou’s response is unequivocal – always work hard and strive to do your best.

“Make every effort to train to become as smart and as skilled as possible in your desired role,” Houssainatou replies. “That means raising your hand to volunteer, getting the job done, and getting it done well. Most of all, make sure you love the work you do.”

That’s something Houssainatou does on a daily basis – and she is delighted other women are getting the same opportunities she has had.

“I would just like to emphasise how important it is that companies like GAC continue to prioritise the progression of women, who must be empowered to work and pursue careers that they love,” she adds.

“I also commend GAC for prioritising the training of local workers in English and IT, and for all GAC does to equip staff with the skills necessary to operate port and mining machinery. There are so many opportunities at GAC to work in operations. I am fortunate to work with such great colleagues, without whom I would not be where I am today.”

Houssainatou takes great care to balance her work and home life, saying her favourite thing to do outside of the workplace is simply “spend time with my husband and kids”.

“I am married and a mother to two children – my daughter, Fatoumata Binta Dial Bass, who is now eight years old, and my son, Mamadou Bhoye Bass, who is five,” she adds. “Their grandmother helps to look after them so that I can work. My husband and I cooperate together to manage our private and professional lives.”

In looking to the future, Houssainatou comments that what excites her most is to see how much the company is supporting and living up its four new values, which were developed with all staff including those in Guinea. These are: safety & sustainability, innovation & continuous improvement, ownership & teamwork, and integrity & fairness. 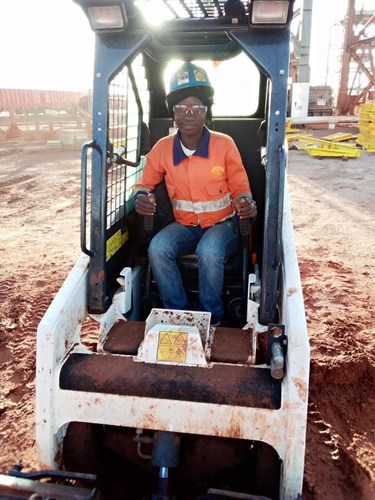 “In both the short- and long-term,” she says, “GAC’s biggest challenge and most important priority will be continuing to guarantee the health and safety of its workers—specifically through the regulation and maintenance of its equipment. This is no small task for one of Guinea’s largest industrial companies.

“Having those four values, however, will define our company for generations to come. They are at the core of everything we do.”

Houssainatou adds: “We may be geographically far away, but I very much feel part of the EGA family, and I am hugely supportive of the new EGA purpose and culture.

“I remember hearing [EGA CEO] Abdulnasser Bin Kalban say how we sum up our new purpose in eight simple words – Together, innovating aluminium to make modern life possible – and what he said hugely resonated with me.

“I – and all of us at GAC – are immensely proud of playing our part in EGA’s global story. By helping to fulfil our company’s purpose in the years to come we will also achieve its new mission to generate value from mining to metal.

“Wherever we are in the world, there is a lot of work to be done for future generations – and when I say that I think of my children and the world I want them to live in. But I know that wherever we work and whatever our task, we are united by our purpose and our culture.”