In 2016, 40 EGA engineers and technologists were sent to Bahrain to work on their most challenging project yet – transferring EGA’s home-grown smelting technology, DX+ Ultra, to Aluminium Bahrain (ALBA) for their Line 6 Expansion project. Late last year, after some 34 months of hard work, the project was officially completed.

EGA was chosen in 2016, ahead of other leading companies, when ALBA launched an international competition to supply technology for its extensive upgrade plans. The victory was a milestone in the development of a UAE knowledge economy, and catapulted EGA into an elite global league of aluminium companies that earn revenue from their technology innovation as well as their metal. EGA was the first UAE industrial company to sell its core process technology internationally. “We had a lot to prove,” says Mustafa Anwar, EGA Technology Transfer and Development Engineer, commenting on the tender process: “There were companies from all over the world bidding for the work – so we had to prove that our technology was world class.” 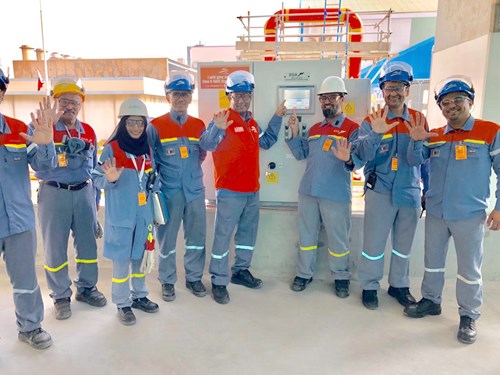 For the EGA technologists and engineers, relocation to Bahrain quickly followed the contract win, to support ALBA during construction of the huge new plant. “It was a massive undertaking,” admits Jamal Al Hemeiri, Lead EGA Engineer. “In any major construction project, you take it step by step, but deadlines are always changing and getting everything you need in the right place at the right time was very challenging.”

Al Hemeiri goes on to explain how ALBA was free to choose the suppliers to manufacture the parts of the large EGA DX+ Ultra reduction cells, or ‘pots’, in which aluminium is smelted. These suppliers, however, had to be vetted by himself and the EGA team to ensure they could meet the demands of DX+ Ultra’s exact specifications. Upon approval of the prototype, these manufacturers made the more than 100 different components required to build each pot. EGA was responsible for approving the first 10 pots, and then for reviewing production of the rest.

This might seem relatively straightforward, but Abdulaziz Ali Sarhan, Lead EGA Engineer, who was responsible for overseeing the construction of the Line 6 prototype pot, says that it is far from a cookie-cutter process. “Pots are like human beings in that they can react differently to the same conditions,” he says. “It’s like bringing a person to life when you start them up, and a tiny variable can have a massive effect. They can run too hot or too cold, and you have to figure out how to get them running smoothly... and they need to be kept running. If these pots were to switch off and freeze, then you’d have a massive cleaning job on your hands.”

That’s why, once pots were started-up, “you're awake at 4am and heading to the site, where you work until 10pm or 11pm,” Sarhan continues. Explaining the motivation for working such long hours over the course of many months he adds matter-of-factly: “You do it because you must make it happen. You have a date to meet.”

Mustafa Anwar, Area Engineer, Technology Potlining, lived in Bahrain from January 2018 to April 2019 where he headed up the construction phase, and was the first UAE national to represent EGA onsite at ALBA. He echoes Sarhan when discussing the intensity of his experience as a leader of the team responsible for supporting the construction of the more than 400 pots for the Line 6 Expansion in little more than year. “I had to learn very quickly and get to grips not just with the construction timelines, but also adapting to a new organisation and a new team. And as a UAE national I felt like I was not just representing EGA but also my country. Fortunately, everyone at ALBA was extremely accommodating and it was a very worthwhile experience.”

This camaraderie bolstered the team against other challenges, such as those that arose following unusually heavy rains that temporarily damaged some pots as the roof was still under construction. “We had to fix this issue without delaying the schedule or compromising on quality,” says Anwar. “It was a hectic period, and my ALBA colleagues said there hadn’t been rain like that in 50 years. But we took onboard the challenge and adjusted our workflow to make sure we were prepared for any future eventualities.”

The EGA team in Bahrain also faced “considerable time constraints,” according to the team’s Project Manager, Nadia Ahli: “ALBA needed us to start-up eight pots per day to hit the deadline. We wanted to meet their expectations, but without compromising on our processes. That was tough, but we managed to achieve both objectives, which we did by working day and night.”

As the only woman involved in leading EGA’s participation in the construction and start-up of the potlines, Ahli also acknowledges that, “at the beginning, there may have been some doubts from some of the non-EGA team members because of my gender. But at the end of the project, they clearly all had full confidence in my ability to manage the floor operations. It was personally satisfying that we all had the same aim, the same focus and the same vision. This brought us all together.”

This confidence and respect also related to the ALBA engineers on the project, all of whom the EGA team hold in high esteem. As a result, “we met every deadline,” Al Hemeiri says. “We'd see the amount of work they had to do, and think to ourselves that they could not do it. But they made every single milestone happen on time. I didn't even believe they could hit some of their targets, but they did it.” In the end, he says, construction was completed in 23 months, comfortably beating the industry’s 30-month average. 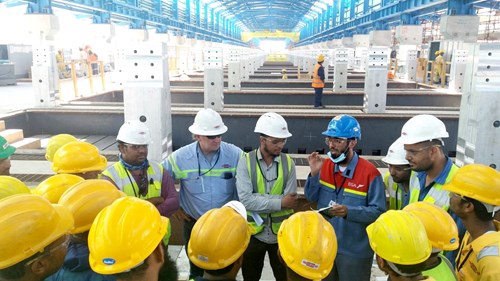 With the project successfully completed, the engineers talk with pride about how their achievement further cemented EGA’s standing as a pioneering leader in the global aluminium industry. “EGA is now both a technology development and technology transfer company, and this raises our profile and our reputation to the elite level in the industry,” says Sarhan. “EGA has developed its own technology over a long period of time, and this allows us to compete with other key players.”

“The aluminium industry is small, and we all know each other,” Al Hemeiri adds. “There are annual conferences where we all meet and share our achievements. So, the team at ALBA knew what we were capable of from the technology work at our own projects at EGA. But we still had to go head-to-head with the best technology providers in the world. And we won thanks to our technology’s performance.”

Now that the engineers have returned from Bahrain and settled back into their roles at EGA, all are excited by the prospect of what comes next for the company’s technology department. In the meantime, however, “the first job is to prepare materials on our learnings at ALBA, so that they can be applied to future projects,” Sarhan says, reiterating EGA’s commitment to learning and continuous improvement. “We're continually refining our technology and have to consider the implications of Industry 4.0 on our future projects. We're capturing new ideas from all our departments and putting them together to imagine what the smelter of the future will look like.”

For Al Hemeiri’s part, there are many reasons to be optimistic about the future of aluminium smelting which looks “even more environmentally-responsible, even safer for workers, and much more automated.”

Most of all, each engineer emphasised the new friendships made working on such an intense, career-defining project.

“You leave with lots of memories and lots of friends that you will never forget,” Ahli says, wistfully. “You learn so much, not only about technology but also about leadership, problem-solving, self-control and managing teams. We were very lucky to be part of this historic project.” 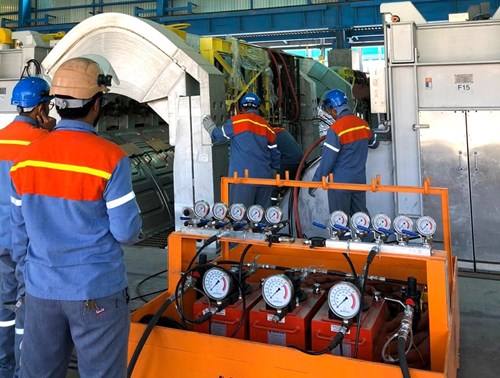 For those not familiar with basic process of how aluminium is smelted, it has been essentially unchanged since it was invented in the 19th century. Aluminium is produced in reduction cells, the size of small swimming pools, where an intensely hot electrochemical process separates aluminium oxide into aluminium atoms and oxygen atoms.

Today, the technological race focuses on how to make more metal with less electricity. EGA’s R&D team has worked for years to increase the productivity of the cell, by minimising energy, capital and operational costs, as well as increasing output and environmental performance. The result, DX+ Ultra, is the 10th generation EGA technology and achieves its world-class ranking through its exceptional energy efficiency. The size and layout of DX+ Ultra pots also means the buildings that house them can be smaller and less costly – DX+ Ultra delivers the highest production per square metre of floorspace of any available smelting technology.

The technology licensing agreement with ALBA stipulated that DX+ Ultra would operate at 460 kiloampere (kA) at Line 6. As it stands, the pots are operating above these original design parameters, at 465kA, with a current efficiency of 95 percent and an energy-consumption rate of 12.87 kilowatt hours per kg of aluminium produced. This translates into even more metal, huge energy cost savings, and, as a final very important pbjective, emissions reductions.

"Utilising EGA’s DX+ Ultra — one of the most efficient technologies in the world — has contributed to a reduction in overall Green House Gas emissions, which is in line with our sustainability objectives," affirmed Acting ALBA CEO, Ali Al Baqali, in a recent statement lauding EGA for its technological contribution.