Born to be different

Standfirst: Hospitalised for months after suffering a stroke at 21, the man with an unusual name is making an out-of-the-ordinary contribution at EGA

As a child, Musameh Ismail didn’t like his name. Musameh, which means forgiveness or even tolerance in Arabic, is not a common name in the United Arab Emirates. In fact, Musameh has never met another UAE National with the same moniker.

“When I was a child, I was always thinking about changing my name because Musameh is not a name in our heritage as Emiratis,” said the Human Capital professional at Emirates Global Aluminium.

“I was always thinking I want to be Abdulaziz or Saif like some of my friends. Then one day at school, when I was in Grade 7, the headmaster came to me and said ‘Musameh, I heard that you want to change your name’. I said yes.

He said, ‘Anyone that meets you for the first time will always remember Musameh. You were born to be different – both in your name and in your life. I know you will progress in life. Use this as a positive thing’.

“From that day forward, I was happy to be Musameh.” 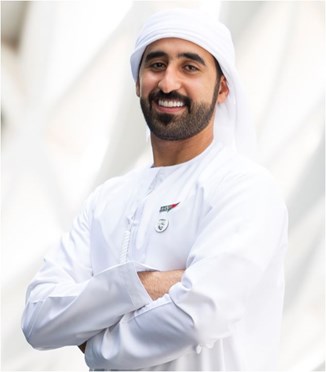 Fast forward to 2014 and the 21-year-old Musameh has been working at EGA for a year as an Operator in the Power Department. He is a keen skydiver, scuba diver and cyclist in his free time.

And then one day towards the end of the year, he suffers a stroke.

“I lost feeling in my face and my hands,” said Musameh. “I lost the ability to talk, and I even forgot all the letters of the alphabet.”

Musameh would spend the next two months in hospital.

During this period, Musameh asked his younger brother to get a white board and write all the letters of the alphabet on it. After his brother left each day, Musameh would spend hours staring at the white board trying to re-learn the letters.

“It hurt and it was difficult but when I started learning again, I refused to stop,” he remembers. “I kept pushing myself to talk and read again.”

To speak with Musameh nowadays – bright, healthy, and full of personality – you would have no idea of the trauma he endured early in adulthood.

Towards the end of 2015, Musameh went back to EGA. His life-changing experience also brought a career re-think, and a move into Human Capital. “Here my story with EGA really starts,” Musameh recalls with a large smile.

Musameh was given two weeks to complete his first big task in his new job, and completed it in one. Given a week to complete the next task, he finished it in three days.

After six months, Musameh had proved himself enough to earn a position in one of Human Capital’s most strategic teams – performance management.

In 2017, EGA began a multi-year, phased journey to reinvent and revolutionise its approach to performance management, a critical factor in business success. Musameh’s goal is to further improve the backbone of the performance management system to ensure it is as easy to use as possible, empowers employees, and enables them to unlock their potential as they progress their careers at EGA.

Musameh has worked on the performance management system transformation from day one. He helped setup new online features and recalls how, “implementing the online system meant training more than 5,000 employees through over 120 training sessions”.

Dedicated to his mission, Musameh is working closely with EGA management to not only enhance the performance management system but also promote new ways of thinking about the vital business function.

Often change goes hand-in-hand with a cultural shift and, following his promotion to the position of Generalist in 2018, Musameh now compiles the new employee induction presentation for new joiners, giving him the chance to shape and inspire EGA’s next generation of talent.

Musameh, who was member of EGA’s Youth Council from 2018 until 2021, also focuses on motivational speaking within the company. Here he recounts not just his own personal journey but also his thoughts on EGA’s huge emphasis on people and becoming a talent-driven organisation – of which he is a prime example. 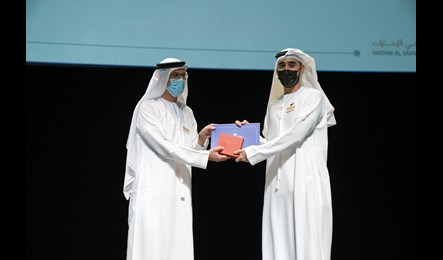 Musameh has also earned an official mental health first aider licence, meaning he is trained to aid colleagues seeking mental wellbeing advice and welfare. “Encouraging and supporting a positive team environment where everyone can contribute is key, and attaining this licence was one small way I could contribute to effective team collaboration across EGA,” he said.

Asked to define what ‘talent driven’ means at EGA, Musameh pauses before replying: “EGA opened a window for me. If I wanted to learn, if I wanted to grow, then I just had to climb the ladder that was there. My colleagues have always been there at the ladder with a helping hand, ready to help when I needed it.”

He adds: “EGA is about people – and helping those people thrive as much as possible is one way we achieve success for our company.”

Musameh may no longer do the high-octane thrills of his youth, but he still keeps active. As well as volunteering at least three times per year, he runs a small farm with his father. They have three horses – which Musameh said he can ride “as long as I don’t fall off!” – and have grown their flock of sheep from 64 to more than 200. 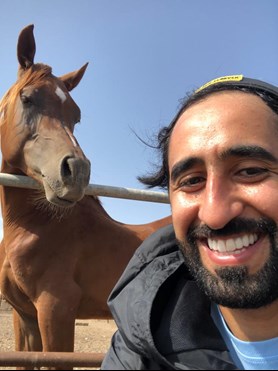 Musameh is currently also writing a book about his life and how he overcame his many challenges to now help EGA colleagues.

Musameh’s tale is one of someone ‘born to be different’. A man of forgiveness, tolerance, warmth, passion, kindness, determination, humour, and so much more. He is an absolute inspiration to all who are fortunate enough to come across him.

And they certainly will always remember the name Musameh.