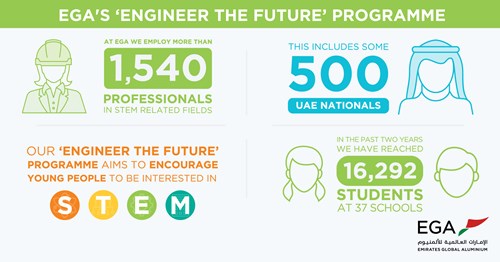 ‘Engineer the Future’ is designed to encourage young people to pursue further learning and ultimately careers in science, technology, engineering and mathematics. These subjects are collectively known as STEM.

Some 37 schools in Abu Dhabi and Dubai have participated in ‘Engineer the Future’ since the programme began in November 2017.

More than 8,000 students participated in the 2018-2019 academic year, with more girls attending than boys.

‘UAE Vision 2021’ calls for UAE students to reach world-class attainment in science and mathematics and for the UAE to transition to a knowledge-based economy that focuses on innovation, research and development.

EGA is a major employer of STEM professionals, with more than 1,540 people working at EGA in STEM-related roles including some 500 UAE Nationals.

Abdulla Kalban, Managing Director and Chief Executive Officer of EGA, said: “Through hands-on learning we hope to inspire young people to study STEM subjects further and ultimately pursue careers in these important fields for our country. ‘Engineer the Future’ aims to show the impact STEM has on the development of the UAE’s industries and the growth of our knowledge-based economy.”

EGA’s ‘Engineer the Future’ programme covers the fundamental science upon which the aluminium industry is based, with lectures and practical hands-on experimentation. During the full-day sessions, students learn about electrolysis, created electrical circuits, and experiment with programming robots.