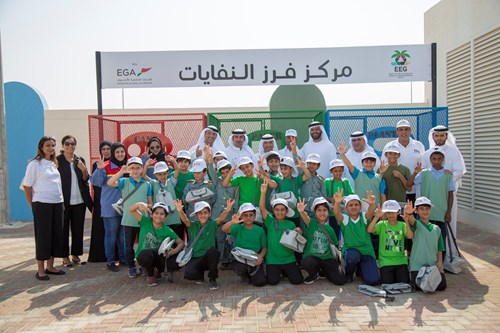 United Arab Emirates, 25 October 2018:  Emirates Global Aluminium, the largest industrial company in the United Arab Emirates outside oil and gas, celebrated the opening of a new recycling centre at Ibin Seena School in Abu Dhabi. The initiative is part of a waste management awareness campaign and will be conducted in five schools in collaboration with Emirates Environmental Group (EEG). Additionally, EGA will plant a total of 150 trees at the schools this year.

The placement of the centres is aimed at increasing awareness of recycling amongst students and to encourage the habit of segregating waste at source. The centre will have facilities for three types of disposals: paper, plastic and aluminium cans. Monthly and end-of-year reports will be generated by EEG to track the volume of materials collected for recycling, along with the carbon emissions mitigated, trees saved, and landfill avoided.. At the end of the year, the top three schools will be awarded for their recycling efforts.

Khalid Buhmaid, Senior Vice President, Government Relations said: “As a major recycler of industrial waste, EGA has always sought to operate in a sustainable way as we aim to meet our environmental and social responsibilities. The opening of this new recycling centre is part of EGA’s strong commitment to protecting the environment. Through this initiative, we aim to raise awareness about recycling and waste management amongst students, while also taking action into limiting waste.”

Habiba Al Mar’ashi, Chairperson of Emirates Environmental Group, said: "The tree planting and the implementation of these Recycling Centres highlight the strong partnership between EEG and EGA. It is an excellent example of a multi-stakeholder engagement to help local communities and promote sustainability in the UAE and the Arab World. As His Highness Sheikh Khalifa bin Zayed Al Nahyan, President of UAE, declared 2018 as the ‘Year of Zayed’, I truly believe initiatives and partnerships such as these truly capture the commitment and passion that Sheikh Zayed envisioned our society to attain."

Since 2010, EGA has invested almost $1 billion in environmental technologies and facilities to reduce and manage its emissions and waste. EGA’s long term aim is to send zero process waste to landfill, and the company engages with other industries to find productive uses for its waste streams.

EGA’s biggest single contribution to environmental sustainability is the continuous improvement over decades of its core industrial processes, reducing costs and environmental emissions.