EGA recognised as a UAE Pioneer 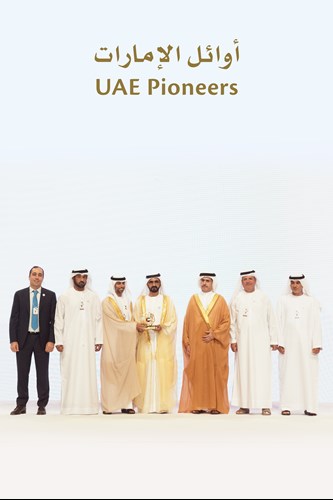 EGA recognised as a UAE Pioneer

United Arab Emirates, 28 November 2018: Emirates Global Aluminium, the largest industrial company in the United Arab Emirates outside oil and gas, has been recognised as a UAE Pioneer by His Highness Sheikh Mohammed bin Rashid Al Maktoum, Vice President and Prime Minister of the UAE and Ruler of Dubai, at a ceremony in Abu Dhabi.

The UAE Pioneer Awards were established in 2014 by His Highness Sheikh Mohammed bin Rashid Al Maktoum and honour service to the nation and pioneering spirit.

The development of EGA, which began in the late 1970s, has taken the UAE from no aluminium production to the fifth largest aluminium producing nation in the world. Today, EGA’s metal is the biggest made-in-the-UAE export after oil and gas.

EGA has also pioneered research and development in UAE industry, allowing it to develop its own technology for more than 25 years. The company’s latest homegrown technology is amongst the most efficient in the global aluminium industry. In 2016, EGA became the first UAE industrial company to license its own large-scale industrial technology internationally.

Abdulla Kalban, Managing Director and Chief Executive Officer of EGA, said: “It is a great honour for EGA to be recognised as a UAE Pioneer by His Highness Sheikh Mohammed bin Rashid Al Maktoum, Vice President and Prime Minister of the UAE and Ruler of Dubai. I would like to thank everyone who has worked at EGA over the past four decades, helping build this company into a leader in the aluminium industry worldwide.”

EGA employs over 7,000 people in the UAE. The company’s workforce includes more than 1,200 UAE Nationals, in line with the ‘UAE Vision 2021’ goal of harnessing the full potential of its National human capital.

EGA is also pioneering the role of UAE National women in heavy industry, with over 16 per cent of staff occupying supervisory roles and above female employees.

Some 26 companies make products in the UAE using EGA’s metal, and are part of local and global supply chains in sectors from construction to automotive.

EGA spends around $1 billion per year in the UAE on goods and services to support its capital projects and operations, including on energy.