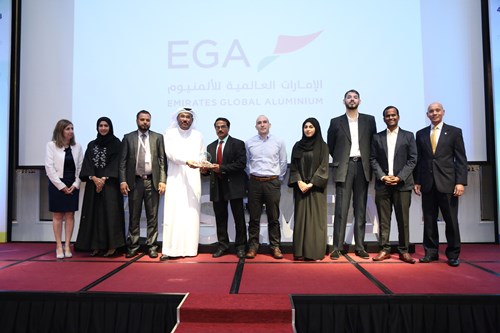 United Arab Emirates, 15 November 2018: Emirates Global Aluminium, the largest industrial company in the United Arab Emirates outside oil and gas, has been recognised by the American Society for Quality (ASQ) with an award for its commitment to innovation within the organisation.

The company was presented with the ‘2018 ASQ MEA Innovation Award for the Government Sector’ during ASQ’s 4th Regional Quality Conference, held in Dubai. ASQ noted the company leadership’s clear commitment to and strategy for innovation, its efficient implementation of a robust Innovation Management System, and the strong partnerships it has developed to help maintain this commitment.

ASQ is a global community of quality professionals, with nearly 80,000 members dedicated to promoting and advancing quality tools, principles, and practices in their workplaces and communities.

Salman Abdulla, Executive Vice President HSSEQ at EGA, said: “Innovation and continuous improvement have been foundations of EGA’s success, both locally and globally, for decades. This award highlights not only the spirit of innovation within our organisation, but it is also testament to our strong support for initiatives that increase innovativeness across the UAE. We thank ASQ for the honour.”

EGA’s research and technology development focuses on enhancing the core aluminium smelting process. Today, EGA’s home-grown technology is amongst the most efficient in the global aluminium industry.

EGA has also run an employee suggestion scheme since 1981 to encourage everyone in the organisation to find ways to improve the company’s operations. Last year EGA employees submitted a record 34,419 ideas, leading to savings of AED 36 million.

EGA has used its own technology, developed in the UAE, in every expansion since the 1990s. EGA’s latest technology, DX+ Ultra has more than double the productivity of the company’s original D18 technology developed in 1990. Energy consumed during the smelting process is amongst the lowest in the global industry.