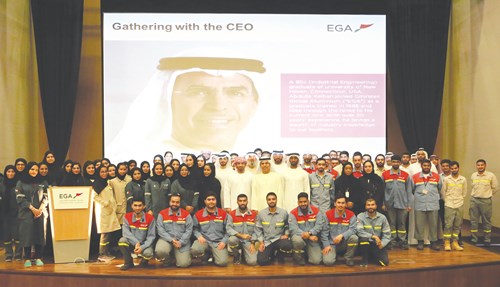 United Arab Emirates, 08 May 2018: The Managing Director & Chief Executive Officer of Emirates Global Aluminium, the largest industrial company in the United Arab Emirates outside oil and gas, has held an open forum with more than 170 of the company’s current and recent graduate trainees to provide guidance on career success and hear their perspectives on making EGA an employer of choice.

Abdulla Kalban, and six other members of EGA’s Executive Committee, originally joined the company as fresh graduates. The young participants in the forum all joined EGA’s 18-month graduate training programme since 2015.

EGA typically has around 100 graduate trainees at any time, Many graduate trainees at EGA have studied electrical, mechanical or chemical engineering or mechatronics, although EGA also recruits graduates in finance, accounting, HR, marketing, supply chain and other disciplines.

Mr. Kalban said: “We need to continue to attract the best young people to join our company and industry, particularly those in science, technology, engineering and maths. In our diverse economy young people have many choices of employers, so hearing the voices of our graduate trainees directly is important to me as Managing Director & CEO.

“I also think it is important for those of us who have had successful careers in science, technology, engineering and maths to stand up as role models, and share what we have learned. I always advise young people to be different and to be patient. Leadership is earned.”

A national survey that was commissioned by EGA last year found that 68 percent of young people in the UAE think having access to role models and on-the-job training or internships would help them pursue careers in science technology, engineering and mathematics.

EGA aims to Emiratise 40 per cent of in-focus positions, or those that can feasibly be Emiratised, by 2020. EGA finished 2017 with 37.6 per cent Emiratisation, the company’s highest ever level.