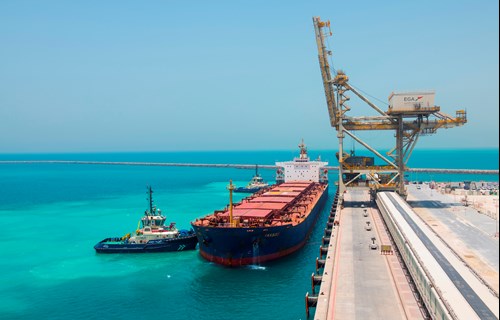 United Arab Emirates: Emirates Global Aluminium, the largest industrial company in the United Arab Emirates outside oil and gas, today received its first shipment of bauxite ore in preparation for the commissioning of its under-construction Al Taweelah alumina refinery.

Abdulla Kalban, Managing Director and Chief Executive Officer of EGA, said: “Alumina refining will be a new industrial activity for the UAE, so this shipment of bauxite is the first ever to our country.

Thousands of people are currently working hard to bring the construction of Al Taweelah alumina refinery to completion, and we look forward to producing our first alumina during the first half of next year.”

Earlier this month, EGA completed construction of a huge shed to stockpile bauxite ready for use. The shed has the capacity to store 450,000 tonnes of bauxite, the same weight as the Burj Khalifa. During operations, stockpiling is required to ensure that production can continue even if there are interruptions in shipments of bauxite.

Bauxite ore is moved from the ship to the shed on a conveyor belt. Al Taweelah alumina refinery will have more than eight kilometres of conveyor belts in total.

More than 13,000 people are currently building Al Taweelah alumina refinery, which is one of the largest industrial construction sites in the UAE.

Alumina refineries convert bauxite ore into alumina, the feedstock for aluminium smelters. Al Taweelah alumina refinery is the first to be built in the UAE.

First alumina from Al Taweelah alumina refinery is expected during the first half of 2019.

Sections of Al Taweelah alumina refinery are being completed in sequence to enable the carefully-planned pre-commissioning and commissioning of the thousands of pieces of equipment that make up the huge plant.

EGA is expanding upstream and internationally to secure the natural resources that the UAE’s aluminium industry needs and to create new revenue streams.

EGA is also building a bauxite mine and associated export facilities. First bauxite from Guinea Alumina Corporation project is expected during the second half of 2019. GAC is one of the largest greenfield investments in Guinea in the last 40 years and has a total budgeted project cost of approximately $1.4 billion.

GAC’s bauxite will be exported to customers around the world. 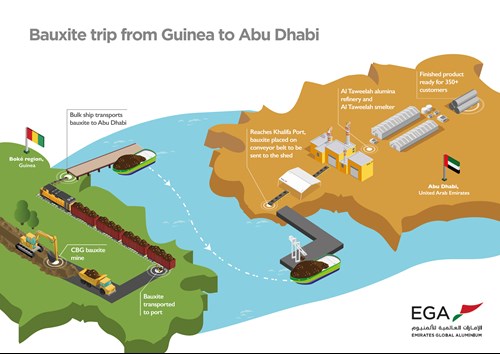