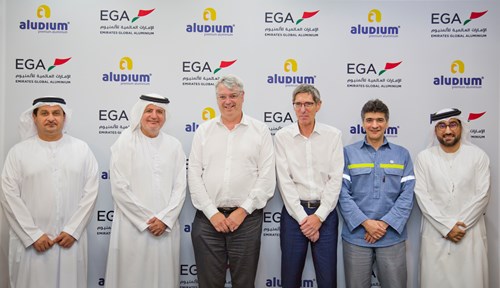 Rolling slab is processed into plate, sheet and foil products which are used in industries from automotive to printing and packaging.

Walid Al Attar, Chief Marketing Officer of EGA, said: “We are pleased that Aludium has chosen to secure these long-term supplies of rolling slab from EGA. We look forward to reliably supplying Aludium with the high-quality rolling slab they need to make their products over the years to come.”

Arnaud De Weert, Chief Executive Officer of Aludium, said: “We are pleased to have secured a multi-year agreement for high-quality rolling slabs. Aludium will be working with a smelter which has a secure and long-term energy and raw material base, and which is committed to the highest standards of quality.”

EGA has the capacity to produce some 400,000 tonnes of rolling slab per year at its Al Taweelah site in Khalifa Industrial Zone Abu Dhabi. EGA produced 2.6 million tonnes of aluminium last year and was the world’s biggest producer of ‘premium aluminium’ or value-added products.